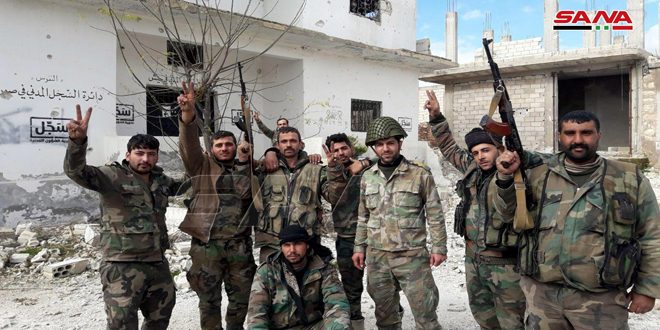 SANA’s reporter in Hama said that over the past few hours, army units engaged in fierce battles against terrorist organizations to the southwest of Saraqeb City in Idleb southeastern countryside through which they liberated the village of Inqrati, Kafr Batikh and Kafr Dadikh after crushing the last gatherings of terrorists in them and inflicting heavy losses on them in the personnel and equipment.

The reporter noted that army units continue their operations in different directions and they are hunting the remnants of terrorists who fled towards Saraqeb City and the surrounding villages.

The reporter quoted identical local and media sources as saying that few days ago, Jabhat al-Nusra terrorists transferred their families from Saraqeb City towards the Turkish borders and they evacuated their positions which shows their anticipation of their defeat.

Army units on Saturday liberated the villages of Louf and Qamhana in the direction of Khan al-Sobul to the east of Saraqeb City, inflicting heavy losses on Jabhat al-Nusra terrorists and the affiliated groups in the personnel and equipment, while other army units liberated the town of Hish and the villages of al-Amiryia, Kafr Mazda, Tabish, al-Bala’a, Jabaal and Tal Armani after eliminating the last gatherings of terrorists in them in the western countryside of Ma’aret al-Nu’aman west of the International Highway.