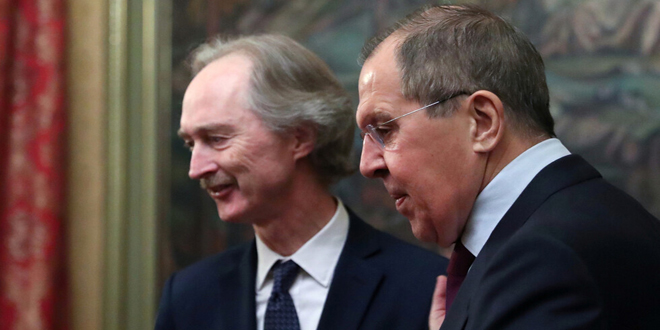 Moscow, SANA- Russian Foreign Minister Sergey Lavrov affirmed the need for eliminating hotbed of terrorism in Idleb and delivering humanitarian aid to people in need in Syria without politicization.

Meeting UN Special Envoy for Syria Geir Pedersen in Moscow on Friday, Lavrov said that the situation on the ground is improving in Syria, where terrorists were eliminated from most of the areas which were under their control and the Syrian state regained its authority over the majority of its territory, pointing out to the need for eliminating hotbed of terrorism in Idleb.

Lavrov stressed the need for delivering humanitarian aid to its beneficiaries in Syria without any politicization under UN auspices as soon as possible.

The Russian diplomat indicated that terrorists imped the entry of humanitarian assistance to Syria and this is unacceptable.

Lavrov called on the international community to facilitate the return of the displaced Syrians to homeland, and actively contribute to reconstruction of Syria.

He considered that the launch of a Committee of Discussing the Constitution in Syria is an important step in the framework of political process to solve crisis in Syria, indicating that Russia will continue to provide support to US efforts in this regard.

For his part, Pedersen affirmed the necessity of combating terrorism in Idleb, creating condition for the return of displaced Syrians and reconstructing Syria.

He indicated that the work of the Committee of Discussing the Constitution is led by Syria and the UN mission is to facilitate its work, hoping that the committee will overcome all obstacles hindering the resumption of its meetings.

Committee of Discussing the Constitution delivering humanitarian aid Idleb Russian Foreign Minister Sergey Lavrov 2020-01-24
admin
Share
Previous Ersan: UN efforts towards Syria will remain fragile as long as there are economic measures on Syrian people
Next Huge crowds in Baghdad call for the ouster of US forces from Iraq