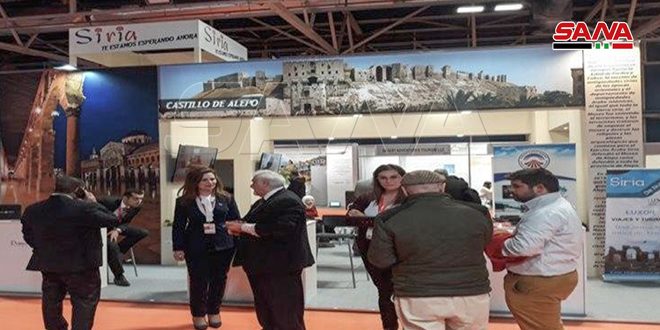 Madrid, SANA- The 40th Edition of the International Tourism Fair “Fitur 2020” on Wednesday started activities with the participation of Syria.

Spanish Queen Letizia launched the activities of the fair which will last till Jan. 26th with the participation of more than 11,000 companies from 165 regions and states including Syria.

In an interview with the Spanish state T.V., Head of the Syrian delegation participating in the fair, Assistant Minister of Tourism, Eng. Ghiath al-Farrah said “Syria’s participation in the fair is a message from the Syrian people to all the countries of the world which reflects the end of the terrorist war they have suffered from since the year 2011 which has destroyed the vital infrastructure in Syria, including tourism sector.”

Al-Farrah called on the Spanish economic institutions and investors and local and international tourism agencies to visit Syria with the aim of get acquainted with the tourism and investment reality in the country, particularly in the stage of reconstruction.

Head of Aleppo Tourism Directorate, Naela Shahoud said that Syria’s participation in Fitur Expo is a message of peace and love from the cradle of civilizations and peace to the whole world.

Shahoud called on the Spanish cultural and tourism institutions to visit Syria and to participate in the tourism and cultural activities held in the country with the participation of Arab and foreign institutions.

The opening of Fitur Fair was attended by Syria’s Ambassador in Madrid Samir al-Qassir and a number of the Syrian community’s members in Spain.

Fitur is considered as the most important and the largest international fair in which major tourism companies and activities from around the world participate.