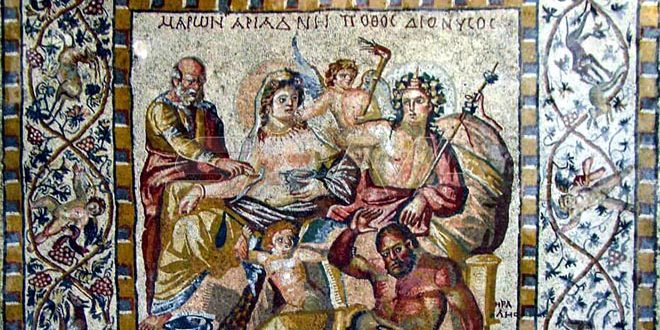 Sweida, SANA_ The Archaeological Museum of Shahba in Sweida province, about 90 kilometers south of Damascus, contains mosaic paintings of great beauty and accuracy that tell the ancient Greek myths presented by the Romans in the middle of the third century AD.

Shahba Museum showcases a lot of archaeological antiquities that date back to different historical eras, the most prominent of which is one that depicts the time of the reign of the Roman Emperor Philip the Arab, who wanted to make Shahba a city that competes the greatest Roman cities, especially Rome.

The paintings, which decorate the museum’s floor reflect, according to Head of the Antiquities Department of Sweida, Dr. Nasha’at  Kiwan, the Greek myths that were performed  on stage.

The paintings aim to stabilize the virtues in man and call for the reform of the human soul such as the painting of Aphrodite and Ares, which shows that beauty turns into an “epidemic” if its owner loses virtue, wisdom and justice.

Dr. Kiwan pointed out that in 1963, four paintings were discovered near the ancient monumental baths within a Roman basalt circuit, which is kept as it is in its place and color, in addition to two paintings transferred from one of the houses adjacent to the museum.

The first panel represents, as Kiwan said, the goddess of the sea, Thetis, which is “the Mermaid of Poseidon”, the sea god of the Greeks, whereas the second painting showcases the Greek singer, musician and poet Orpheus standing on a rock playing tunes and singing songs.

He added that the third panel presents the weddings of Dionysus, the fertile god, and Ariadna the goddess of the plant, and between them there is a small god of love with a hand holding a torch to show that marriage is not completed but with love.

Hercules, who represents strength on the ground, appears at the bottom of the plate rejoicing at the marriage of his friend, “Dionysus Bacchus “, while the four corners of the panel are facing human faces symbolizing the seasons of the year and the continuation of life and fertility throughout its days, according to Kiwan.

The fourth panel represents the love between “Aphrodite”, the goddess of beauty and “Ares”, the god of war. Four human faces representing the four seasons are shown on the corners of the fifth panel, as for the sixth painting it was transferred to Sweida Museum and represents Artemis the hunting gods of the Greeks. Kiwan concluded.

Shahba Museum was opened in 1968 and embraces, in addition to the paintings, masterpieces of stone mosaic, basalt, statues, and pottery jars dating back to the Roman era and a statue of Philip’s head that is made   from the white marble.

2020-01-06
ghossoun
Share
Previous Azzam offers condolences over martyrdom of Soleimani and his companions
Next Millions of Iranians bid farewell to Soleimani, his companions in Tehran 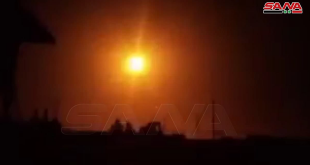 Damascus Countryside, SANA- The Zionist enemy launched an aggression from the direction of the occupied …