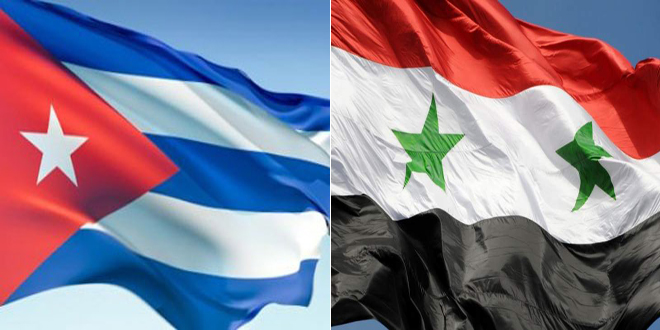 Damascus, SANA- A long history of mutual steadfastness, support and respect links Syria and Cuba as the relations between the two countries have been characterized with coordination in various domains based on clear and common visions in regard to the international issues and those of mutual concern.

On the 61st anniversary of the triumph of the Cuban revolution on January 1st , the two countries continue their relations on a firm approach that is based on the respect of the states’ sovereignty, non-interference in their internal affairs and facing international terrorism.

The deep-rooted relations between the two countries have been embodied in their stances towards each other as Cuba stood by Syria during the terrorist war waged against it, and supported it at the international forums, and the Cuban Embassy in Damascus continued its work throughout the crisis, while Syria continued its firm support to the Cuban people’s struggle against imperialism and the unfair economic siege imposed on Cuba since decades.

In the economic field, Cuba participated in the 61st edition of Damascus International Fair, while Syria participated in activities of the 37th Edition of Havana International Fair which reflects the two countries’ desire to continue their cooperation in light of the current harsh circumstances due to the unfair economic siege imposed on them by the United States and other parties because of their independent stances and rejection of the hegemonic policies.

Cuba has been facing a coercive economic siege imposed by the U.S. from six decades which has caused daily losses to the Cuban people estimated at USD 12 million.