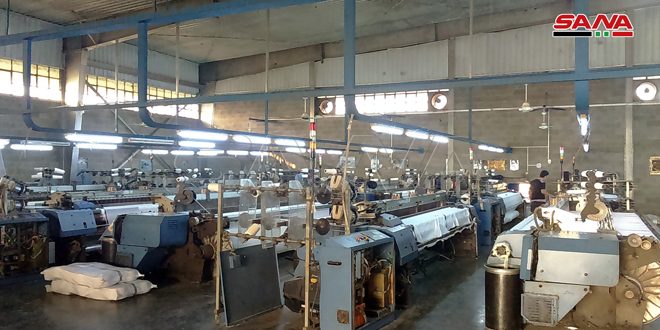 Aleppo, SANA- The number of industrial establishments operating at the industrial city of Sheikh Najjar in Aleppo reached about 600, despite the damage the city suffered from due to terrorism and the stealing of production lines and machines.

Engineer Hazem Ajan, Manager of Sheikh Najjar industrial city, told SANA reporter that since the liberation of Aleppo in the year 2016, work has begun to rehabilitate and restore infrastructure and industrial facilities in the city.

With the governmental support, more than 127 service projects with a total value of more than SYP 7.5 billion have been implemented to push forwards the production wheel at the industrial city, including industrial water and drinking water projects.

Two industrial water pumping stations have been rehabilitated, in addition to the rehabilitation of 3 electrical transmission stations, and currently, two stations are being rehabilitated to put them into service soon.

As well as the rehabilitation of terrestrial and pneumatic electrical networks and transformational centers and the feeding of the productive facilities, which has encouraged the owners of industrial establishments to restore and rehabilitate their facilities and return to work.

The number of producing establishments has reached 600, including 300 for the textile industry, 150 for the engineering industry, and the rest for the chemical and food industries. Meanwhile, work is under way to rehabilitate and restore 250 industrial facilities to put them back into service during the next few months, according to Ajan.

He added that the volume of investment at the industrial city exceeded SYP 130 billion, as new investments entered the labor market while the number of building licenses granted was 150 in 2016 and 100 in the last year, pointing out that the industrial city moved to implement strategic projects, including the fairground project, which is one of the projects which is considered as one of the pioneer projects that has been approved.

SANA’s camera toured a number of industrial establishments that returned to production and monitored the rehabilitation works and the production mechanism.

An owner of a furniture manufacturing facility talked about the serious damage inflicted on his facility due to terrorism and the efforts he has made to rehabilitate it, expressing determination to re-operate it again.

A number of industrialists said that after the Syrian Arab army liberated the Industrial city from the terrorist groups, they have returned to their facilities to rehabilitate, maintain and re-operate them.

It is noteworthy that the area of the industrial city is estimated at about 4412 hectares and it includes textile, engineering, chemical and food industries.