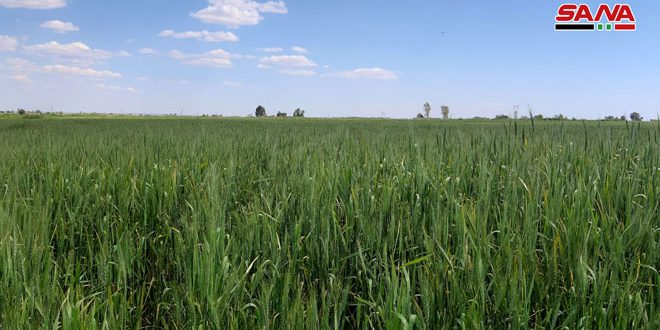 Damascus, SANA- A notable increase has been witnessed in the areas cultivated with wheat and barley for the current season compared to the previous season as a result of the return of farmers to their areas which have been liberated from terrorism as security and stability have prevailed in most important agricultural areas, in addition to the significant amount of rainfalls.

The implementation rate of wheat cultivation plan this season reached up to 57 percent of the planned amount which is estimated at 1,801,094 hectares while with regard to the barley cultivation plan, the execution rate hit 86 percent out of the 1,499,866 hectares which were planned to be cultivated and the process is still ongoing.

In a statement to SANA Economic Bulletin, Qadmani said that the total area planted with wheat amounted to 1,027187 hectares till Dec. 25th in comparison with 787,725 hectares in the same period of the previous season with an increase of about 240,000 hectares.

With regard to the barley crop cultivation plan, Qadmani noted that the majority of the area was concentrated in Hasaka province with a total of 445 thousand hectares out of 358 thousand planned to be cultivated, with an implementation rate of 124 percent.

In Hama, the areas cultivated with barely amounted to more than 132 hectares with a percentage of implementation of 97 percent.

Qadmani pointed out that the execution rate of the plan of rainfed barely cultivation hit 86 percent while, while it reached 79 percent for the irrigated agriculture.