40 health centers, 8 hospitals rehabilitated and put into service in Aleppo 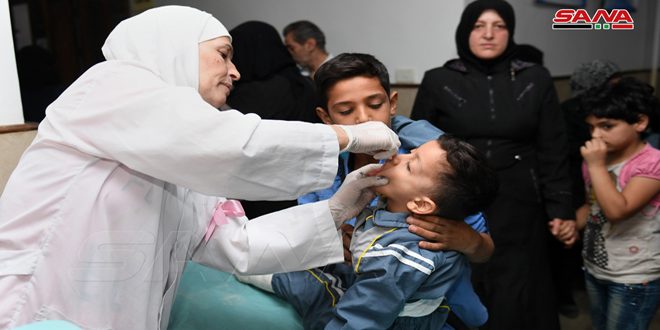 Aleppo, SANA- Three years following its liberation from terrorism, the health sector in Aleppo province is gradually regaining its presence by rehabilitating damaged hospitals and health centers in order to provide health services to the locals after years of stoppage due to the terrorist war waged against the country.

According to Dr. Ziyad Haj Taha, Director of Health Department in Aleppo, 40 medical centers have been rehabilitated and put into service in addition to continuing work and providing free medical treatment to citizens at 8 hospitals, with plans to put more such facilities in service and supply them with medical equipment and staff, respectively.

Haj Taha told SANA reporter that the Department has qualified the emergency system which has been supplied with cars, in addition to supplying the Public Health Programs Department with modern mobile clinics and a radial clinic, indicating that successive vaccination campaigns have been continued throughout the years of the war and they haven’t been stopped thanks to the relentless efforts exerted by the medical staff of the Department.

He pointed out that the process of activating health centers in the countryside and the city and providing them with modern medical equipment has been continued, where a Magnetic Resonance Imaging (MRI) device was installed and put into service in the Ibn Rushd Medical Complex to provide free medical and treatment services to citizens.

A lithotripsy device has been also installed in al-Razi Hospital and an advanced acoustic room is being installed in addition to EEG device.

Haj Taha pointed out that the medical services provided since 2017 until now within the hospitals have reached up to 4 million and 350 thousand services, including one million and 700 thousand services provided at al-Razi Hospital, in addition to the services that have been provided through health centers and primary health care centers free of charge along with providing medicines for chronic diseases such as cancer, sclerosis and joint diseases.

Hospitals in the province have been badly affected by terrorism and currently there are 8 hospitals that provide different health services to citizens, the most important of which is al-Razi Hospital, which continues to provide medical services until now and throughout the terrorist war waged against Syria.

A study is underway to rehabilitate children and eye hospitals through the General Company for Engineering Studies and their restoration will begin with the coming of the next year and they will be prepared to be put them into service soonest possible.

Oncology Hospital is being prepared and supplied with the required equipment and in it has reached the final stages, and a medical linear accelerator (LINAC) device will be brought to provide radiotherapy to cancer patients.

Director of the Health Department also noted that there are centers concerned with breast health and they provide mammography and early detection services for cancer, including a specialized breast health center, a government obstetric hospital center and a center at Ibn Rushd Medical Complex.

SANA’s camera toured the liberated neighborhoods and inspected some medical services that are provided to people through the health centers which spread there including the al-Haydariya Health Center.

Dr. Anwar Masasati, Director of the Fourth Health District, explained that al-Haydariya center was opened a month ago and it serves Hanano and al-Haydariya areas as it includes Gynecology clinic, dental clinic, dermatology clinic and an internal medicine clinic, in addition to a feeding room for children and the required vaccines for children.

The center receives daily between 70 and 80 patients, and it is equipped with the latest medical and laboratory equipment and free medicines.

At the Emergency System Department, Dr. Mohammad Jihad Baij, Head of the Department, talked about the return of the ambulance system in Bustan al-Qasr to work after the liberation of Aleppo and the completion of maintenance and restoration work and providing the system with new ambulances to serve the emergency cases of citizens by meeting their calls on the free automatic call 110 where the medical staff are directed to site to handle the case or transfer it to the nearest hospital, pointing out that ambulances were badly damaged by terrorist attacks, as the number of cars currently in service is 18 out of 70 cars that were operating before the crisis. 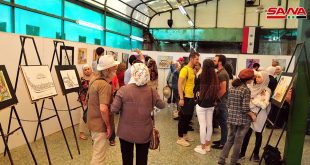