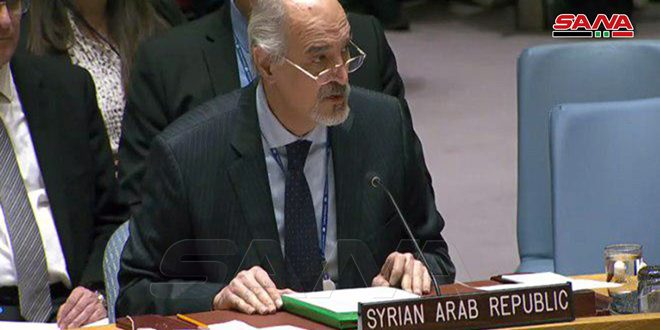 New York, SANA_ Syria’s Permanent Representative to the United Nations, Dr. Bashar Al-Jaafari, stressed that terrorist organizations continue to control Idleb province and take civilians as human shields, affirming that the Syrian state’s duty is to rid them of these organizations.

During a session of the UN Security Council on the situation in the Middle East, al-Jaafari, explained that at a time when member countries of the UNSC worked to hinder efforts of the Syrian state and its allies to fight Daesh and Jabhat al-Nusra terrorist organizations in Idleb and its countryside, some of them boasted of an alleged operation in Idleb led to the killing of Daesh leader terrorist Abu Bakr al-Baghdadi and a number of leaders of the organization.

“This claim confirms what Syria and the United Nations Analytical Support and Sanctions Monitoring Team said that the terrorist organizations impose their control on Idleb and take civilians as human shields.”

The Syrian Diplomat reaffirmed in this regard that it is the duty of the State to free its citizens from the control of these terrorist organizations.

Al-Jaafari exposed the hypocrisy of some members of the Security Council, claiming to be heroes for allegedly killing the terrorist al-Baghdadi, while filling the United Nations halls with their shouts and mobilizing mechanisms against the Syrian State when the latter tried to eliminate the terrorist “al-Baghdadi” and his organization, as well as the leader of Jabhat al-Nosra “Abu Muhammad al-Golani”, and others in Idleb.

“Those same countries attacked the Syrian army when the latter was in full combat to eliminate the terrorist organization of ” Daesh “in al-Jazira region as it happened on al-Tharda Mount near the city of Deir Ezzor and elsewhere,” he said.

Al-Jaafari stressed the necessity of all member states inside and outside the Security Council to adhere to respecting Syria’s sovereignty, unity and territorial integrity based on the principles of international law, provisions of the UN Charter and resolutions of the UN Security Council relevant to the situation in Syria.

He also urged the Security Council to “assume its responsibilities in terms of ending the illegal presence of foreign forces in Syrian territory and forcing countries that continue to support terrorism and plunder the country’s resources, including its oil, to stop doing that.”

Syria’s Permanent Representative highlighted the need to immediately lift the unilateral coercive measures imposed on the Syrian people, which “represent an economic terrorism and collective punishment that deprives Syrian children of milk, food supplies, medicines, medical equipment and requirements for healthcare and wheelchairs for the disabled.

In response to interventions by some delegates to the Security Council, al-Jaafari criticized some members of the Council which ignore the fact that in Syria there is a US occupation and a robbery of Syrian oil; and that there is also a Turkish occupation and a demographic change operation in some Syrian-Turkish border areas.

“It cannot be ignored that there is a terrorism in Idleb composed of terrorist entities that enjoy the public support of their sponsors; besides there are governments that refuse to repatriate their terrorists from Syria, ”he said.

Al-Jaafari said: “ It is necessary to cooperate with the Syrian State as a key partner in the humanitarian and development field, away from any political precondition or rejected dictates, or blackmail attempts with the aim of hindering reconstruction efforts and the return of displaced people,”

He  called for an end to attempts of improving the image of terrorist organizations such as the“ White Helmets, ”whose founder, according to the New York Times, is James Le Mesurier, a former British intelligence services officer, a fact that Syria repeatedly emphasized it but some tried to cover it up.