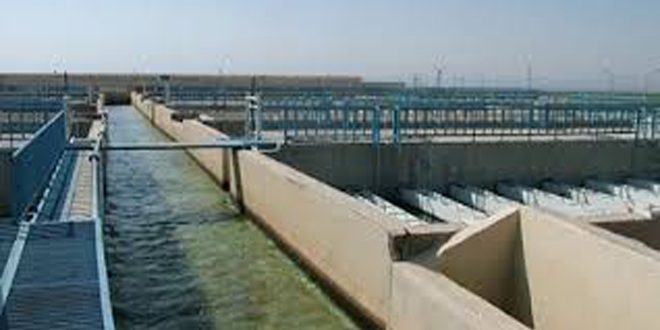 Hasaka, SANA- Turkish regime-backed terrorist groups continue to prevent the specialized teams from reaching Alouk drinking water plant in Ras al-Ayn countryside to put it into service again. The plant is the main source of drinking water for the locals of Hasaka province.

SANA reporter in Hasaka said that terrorist groups impose control on Alouk Water Plant in Ras al-Ayn eastern countryside, which has been shelled in the beginning of the Turkish aggression on the Syrian territories.

He added that these terrorist groups are still preventing the specialized technical teams from reaching the plant to re-operate it causing a water shortage in Hasaka city and its countryside and in Tal Tamer and its countryside, Twaina, Safia, and al-Houl and the affiliated  residential compounds.

Alouk water plant is considered the main source for supplying more than 700 thousand of the locals in Hasaka province with drinking water, and the continued control of terrorists over the plant which has went out of service has led to preventing the locals from the clean drinking water as they currently depend on the water of dams and some wells which don’t meet their needs and their water is notably turbid.

The lines which had been supplying the plant with electricity were targeted in the beginning of the Turkish aggression on the Syrian territories as the water supply to the city has been cut off, yet the technical teams on Oct. 19th were able to fix the electric lines which feed the plant, but the plant has stopped pumping water from a week ago after terrorists imposed control on the area.

A source at the General Establishment for Drinking Water in Hasaka told SANA reporter that there have been many attempts to reach the plant through the Syrian Arab Red Crescent (SARC) and all of them have been doomed to failure due to the terrorists as the water supply has been cut off from more than six days and the workers have been prevented from entering the plant and putting it into service again.

The source added that the Establishment will depend on the stored water at the eastern dam to supply the city with water despite of the fact that the amount of the stored water is not enough, indicating that there must be a way for putting Alouk plant into service again.

He affirmed that the pumping of water from the dam to the city will start on Tuesday evening.

The Governorate has also taken the required measures to provide the drinking water for the locals as eight wells have been put into service in the city, yet the needs of Hasaka city exceed their capacity.

2019-10-30
ruaa-jazaeri
Share
Previous 6 persons injured in a blast near al-Derbasiyeh crossing on borders with Turkey
Next U.S. House calls on Trump to impose sanctions on Turkish regime due to its offensive on Syria