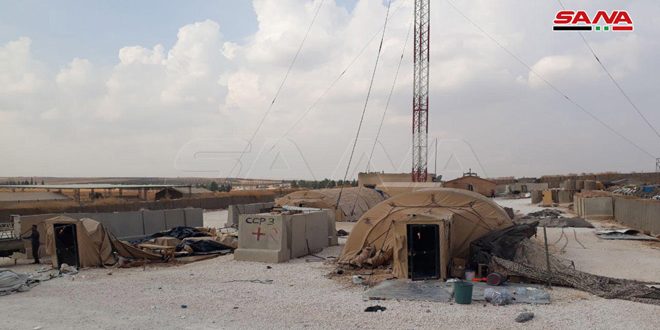 Aleppo, SANA- SANA’s camera on Sunday entered the US base in al-Saidiyah area southwest of Manbij, which had been evacuated by US occupation forces a few days ago.

SANA’s camera toured the base and documented the equipment, weapons, and ammo which the US occupation forces had burned down before their withdrawal from the base.

The fortified base contains a shooting range, facilities the maintenance of vehicles, nursing stations, training areas, entertainment facilities,  communication centers, and a number of security offices.

The US occupation forces burned down the documents , communication devices , laptops, computers, monitors and medicine they left behind.

On a relevant note, SANA’s reporter in Hasaka said that a military convoy consisting of around 20 vehicles headed from Aleppo countryside towards Iraq via Tal Tamr road after evacuation Sarrin base in Aleppo’s northeastern countryside.

The reporter also said the US occupation forces scuttled al-Qleib base in Tal Baidar area which used to contain a landing strip for military transport vehicles and helicopters, while soldiers in a base near April 7th Dam began evacuating that base.

In addition, the reporter said that US occupation forces brought in a convoy consisting of more than 100 empty trucks accompanied by military vehicle from northern Iraq into Syrian territory, heading to Abdulaziz Mountain southwest of Hasaka to empty the warehouses of US positions. 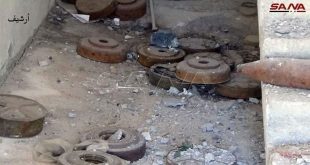 Palmyra, SANA-Two civilians were martyred and three others on Saturday were injured in a landmine …