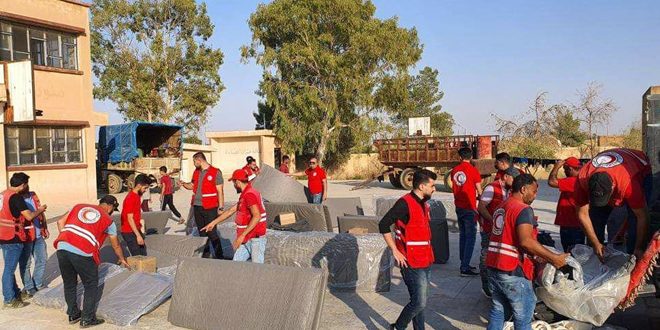 Hasaka, SANA_ The  continued Turkish aggression on the Syrian territory for the 10th consecutive day has led to a rise in the number of displaced Syrian persons who came from border cities towards centers of the main cities and countryside amid difficult humanitarian situation.

According to statistics of Director of Social Affairs and Labor Issam al-Hussein, the number of the displaced families reached 33197  including 165898 persons, distributed to makeshifts.

In a statement to SANA reporter, al-Hussein said  that the Turkish aggression on Syrian territory “caused a large displacement movement of the population of the cities of Ras al-Ayn, al-Darbasiyah, Amuda, Qamishli, al-Qahtaniyah, al-Malikiyah and its countryside”.

He added  that 39 makeshifts were opened of which 26 in Hasaka city, six in Qamishli and seven others  distributed in Tal Tamr, Maabda and al-Yarubiya.

For his part, Director of the Syrian Arab Red Crescent ,Hasaka Branch, Amer al-Ukleh told SANA reporter that the Red Crescent teams immediately rushed to receive the displaced people and provide them with relief, humanitarian and health services.