Syria, Iraq and Iran sign minutes for cooperation in domain of comprehensive transport 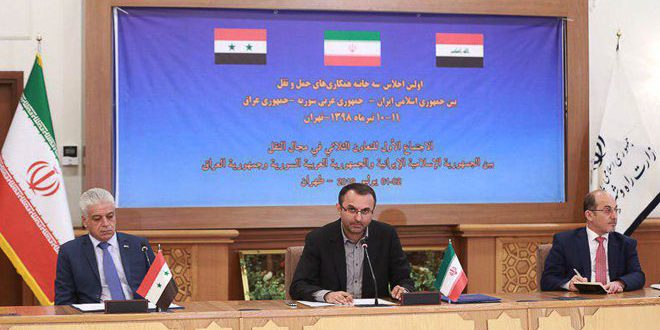 Tehran, SANA- The Syrian Arab Republic, the Islamic Republic of Iran and the Iraqi Republic on Wednesday signed  meeting minutes for cooperation in the domain of comprehensive transport.

The minutes include forming a central committee for the tripartite cooperation to facilitate the measures and provide the required support to overcome all the obstacles and to implement the project of comprehensive transport successfully.

Specialized work teams in all domains of transport will be also formed to work on preparing the required technical study to  carry out that project successfully.

The minutes also call for exerting more efforts with regard to achieving the railway networking between the three countries, in addition to exchanging expertise, training cooperation and developing skills in different technical and administrative spheres

Al-Fares, in a statement to SANA, said that the project of the railway networking will effectively contribute to saving time and achieving a safe and economical transport route that would reflect positively on the citizens with regard to the time and cost.

During the signing of the minutes, Adamnejad said that the tripartite meeting resulted in positive outcomes among the three sides, affirming that the goal of the negotiations is to activate the Iranian-Iraqi-Syria load and transport corridor as a part of a wider plan for reviving the Silk Road as the three countries have an old experience in the international trade.

He underlined the necessity of facilitating the flow of trade and commodities between the three states, indicating that the efforts that would be exerted by businessmen and investors will increase the trade flow between the three countries with billions of dollars.