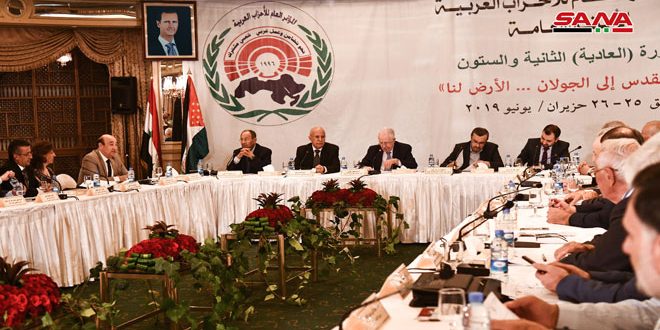 Damascus, SANA- The final statement of the General Secretariat of Conference of Arab Parties in Damascus affirmed Syria’s right to restore all of its territories.

The statement read that the General Secretariat condemns US President Donald Trump’s declaration on the occupied Syrian Golan and the policy of compliance and normalization adopted by some Arab regimes who host Zionist journalists and media outlets on their lands.

The statement also condemned the unjust US siege imposed on Syria, Iran, Yemen, and Venezuela, affirming that it is a stark aggression.

compliance and normalization General Secretariat of Conference of Arab Parties stark aggression unjust US siege 2019-06-26
shaza
Share
Previous On anniversary of liberating Quneitra….The return of occupied Syrian Golan inevitable
Next Army responds to terrorists’ attacks, kills a number of them in Hama countryside