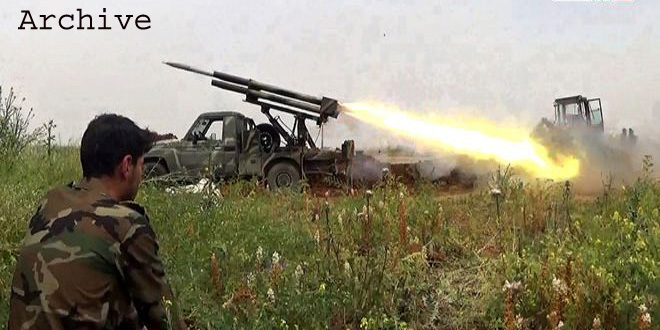 Hama, SANA- Syrian Arab Army units conducted a series of intensive bombardments against positions of “Jabhat al-Nusra” terrorists in Hama northern countryside, inflicting heavy losses upon them in the personnel and equipment in retaliation to their frequent breaches of the de-escalation zone agreement.

SANA reporter said that army units operating in Hama northern countryside targeted positions of Jabhat al-Nusra terrorists and the affiliated groups on outskirts of al-Mashik and al-Ziyara town in al-Ghab Plain with a  barrage of missiles.

Army units also expanded the scope of bombardments against terrorists’ positions in the direction of Atshan town in the countryside of the city.

The reporter indicated that heavy losses were inflicted upon terrorists in the personnel, in addition to destroying a number of their vehicles, positions and fortifications.

On Sunday, army units killed a number of “Jabhat al-Nusra ” terrorists after targeting their positions in the villages and towns of Ma’ar Zita, Kafr Sajna and Kafr Awaiyed in Idleb southern countryside and on the outskirts of Tal Malah, Kafr Zita and al-Latamina in Hama northern countryside.

2019-06-26
ruaa-jazaeri
Share
Previous Luzar: Some NATO member states have been main reason behind wars in Syria, Libya and Yemen
Next Al-Jaafari: Syria will continue to combat terrorism…no state accepts to allow terrorists to be in control of one of its areas

New York, SANA-Syria’s permanent representative to the UN, Dr. Bashar al-Jaafari, affirmed that the US, …