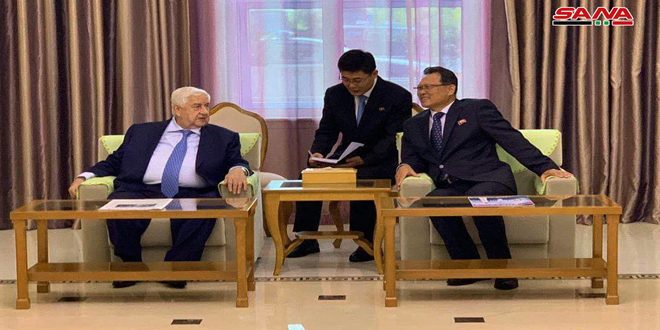 Pyongyang, SANA_ Deputy Prime Minister, Foreign and Expatriates Minister Walid al–Moallem and his accompanying delegation on Friday began an official visit to the Democratic People’s Republic of Korea (DPRK) at the invitation of his counterpart Ri Yong Ho.

During his visit, Minister al-Moallem will discuss with senior Korean officials various aspects of the bilateral relations and means of enhancing them in all fields.

Talks also will deal with developments in the Middle East and East Asia, as well as issues of mutual interest on the regional and international arenas.

Earlier, al-Moallem concluded a five-day visit to the People’s Republic of China during which he reviewed with Chinese officials bilateral relations and means of enhancing them,  developments of the situation in Syria and issues of mutual concern.

al-Moallem Pyongyang starts visit 2019-06-21
ghossoun
Share
Previous Yoga for Peace and Tranquility activity held at al-Jala’a Sports City in Damascus
Next President of South Ossetia: Syria is in the front of countries which fight terrorism