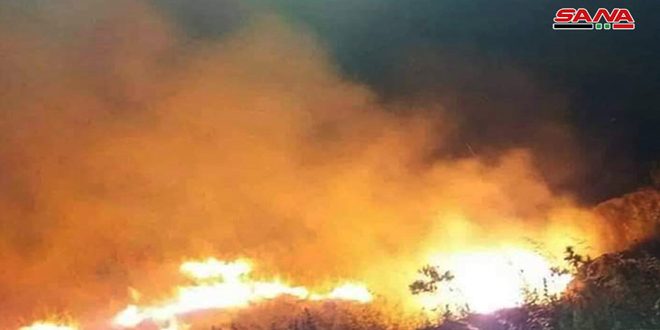 Quneitra, SANA –In the framework of their aggressive exercises against the occupied Syrian Golan, the Israeli occupation authorities committed arson to agricultural and pastoral lands that are located to the west of Saida al-Hanout village in the liberated area in southern countryside of Quneitra province.

Deputy Chairman of Quneitra Executive Bureau, Hussein Ishak told SANA that this is an expected act of the occupation, adding that it violates the international agreements and proves the hostile nature of the Israeli occupation.

Colonel Firas Samara, Head of Readiness Department, said that the occupation authorities set fire to the area to the west of Saida al-Hanout late at night, causing damage to the agricultural and pastoral lands.

He added that the fires were put out by the fire brigade and Quneitra Agricultural Directorate.

Quneitra Agricultural Director, Shaman al-Juma said that the arson caused damage to 70 donums of wheat and 20 donums of pastral areas.

2019-06-08
Rasha milhem
Share
Previous A citizen killed, three injured in a terrorist rocket attack on Shezar in Hama
Next Fire broken out in a house in Damascus put off, no casualties reported