Larijani: Syria has foiled the conspiracy through steadfastness and its people’s resistance 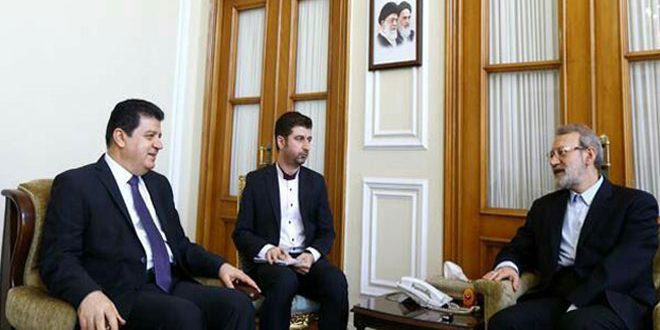 Tehran, SANA – Speaker of the Iranian Shura Council Ali Larijani stressed that Syria managed to foil all conspiracies that aim at targeting it through steadfastness and the resistance of its people.

During his receiving Syria’s Ambassador in Tehran, Adnan Mahmoud, Larijani said that Syria has overcome the conspiracies plotted against it and has become stronger.

“What has been witnessed during the latest summits held in Mecca in Saudi Arabia that some Arab regimes insist on repeating their pervious defeats imagining that they could compensate their failure through issuing statements,” he pointed out.

For his part, Ambassador Mahmoud said that the war the Resistance is facing is continuous in all aspects, pointing out that the Israeli entity since the very beginning has been blatantly coordinating with the terrorist organizations as it is a co-aggressor.

He noted that Mecca Summit has not achieved any tangible outcomes.
R. Milhem