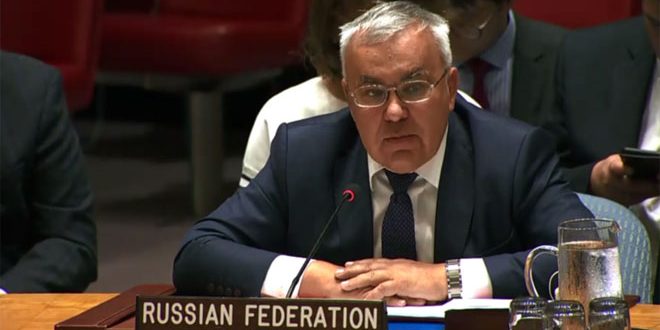 New York, SANA- Russian Deputy Foreign Minister Sergey Vershinin reiterated the necessity of crushing Jabhat al-Nusra terrorists in Idleb who are still attacking the cities and the neighboring towns, in addition to targeting posts of the Syrian Arab Army.

In a statement during a session of the Security Council on the situation in Syria on Tuesday, Vershinin noted that the Syrian Arab Army confronts terrorist groups in Idleb who are affiliated to Jabhat al-Nusra terrorist organization as they continue to breach the de-escalation zone agreement in the province, therefore, combating terrorists should continue in it.

He indicated that Jabhat al-Nusra terrorist organization has established control over most areas in Idleb province, adding that its terrorists are still promoting false and baseless news on using toxic chemicals by the Syrian Arab Army.

Vershinin said that leaders of Jabhat al-Nusra terrorist organization are still preparing to stage false flag chemical attacks meanwhile terrorists from the organization are promoting false news which are circulated by Western media.

He reaffirmed the call for unifying efforts to eliminate terrorism in Syria and to speed up the reconstruction and the return of the displaced to their homeland.

Vershinin added that the situations in al-Houl Camp in northern Syria are catastrophic as more than 73 thousand persons live in harsh circumstances in it and they should leave the camp, indicating that thousands of the displaced Syrians have left al-Rukban Camp and they returned to the areas which have been liberated by the Syrian Arab Army.

2019-05-29
ruaa-jazaeri
Share
Previous Rituals of the holy month of Ramadan in Damascus Old City
Next Zeman: Some Western states’ policies towards Syria, Iraq and Libya resulted in large numbers of victims