Al-Jaafari: Syria will continue fighting terrorism and protecting citizens from its danger 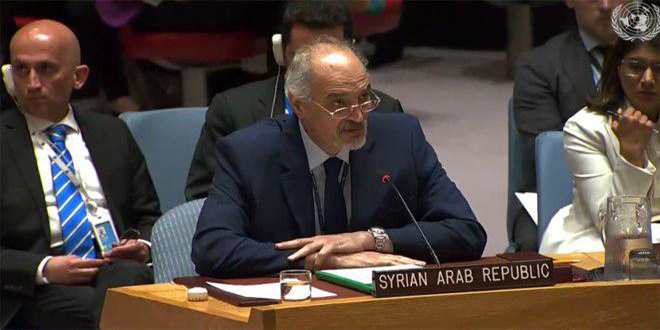 New York, SANA-Syria’s permanent representative to the UN, Dr. Bashar al-Jaafari said on Thursday that Syria will continue fighting terrorism and protecting citizens from its danger, adding that protecting civilians is the responsibility of the State and its sovereign institutions.

“The Syrian people have long suffered from a terrorist war, supported and funded by known governments which sponsor the international beyond-border terrorism, but the Syrian state has been able, with support of true allies, to keep the structure and work of its national institutions,” al-Jaafari said at a UN Security council session on protecting civilians in armed conflicts.

He added that Syria has reservation on the description of UN Secretary General’s report, entitled “Protecting Civilians in Armed conflicts,” which depicted that war against al-Qaeda, Daesh and Jabhat al-Nusra terrorist organizations as “armed conflict,” affirming that protecting civilians is mainly a responsibility which is assumed by the State concerned and  its sovereign institutions.

Al-Jaafari reiterated that Syria will go on, in cooperation with its allies, to practice its duty and right in protecting its citizens from the terrorist groups which comprise tens of thousands of foreign terrorists who came to Syria from more than 100 countries.

“Syria has been able, in cooperation with the Russian government and other friends, to carry out steps that contributed to spare the blood and protect civilians as well as restoring security in addition to completing reconciliation processes which made thousands of militants to throw away their weapon in turn of amnesty,” al-Jaafari said.

He added that the Syrian government has restored security and stability to regions which were seized by terrorist groups and returned civilians to their houses in addition to engaging in the political process in cooperation with the UN Special envoy for Syria in light of UNSC resolution No. 2254 for 2015.

Al-jaafari went on to say that the collective, international work within the UN faces legal and moral crisis while some countries impose coercive, unilateral economic measures on a number of states like Syria, Cuba and Iran, even, they name this economic terrorism as part of pre-emptive diplomacy.

“There are still some countries find it as no fault to defend the Israeli continued occupation of Palestine and Golan,” al-Jaffari concluded. 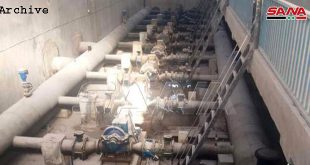