President al-Assad to Arreaza: What is going on in Venezuela is similar to what happened in Syria and it aims at controlling states 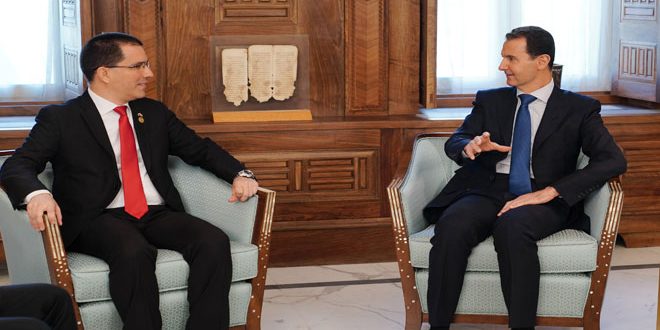 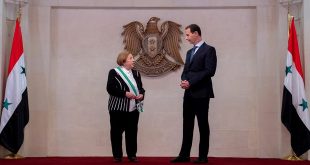 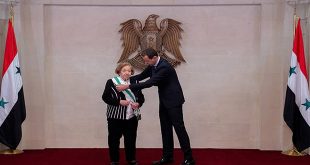 President al-Assad was briefed on the latest developments taking place in Venezuela by Minister Arreaza, as he expressed confidence that Venezuela will overcome the crisis that it is currently facing and restore the state of stability soon enough.

President al-Assad pointed out that the policies adopted by some western states, on top of which, the USA towards what is going on in Venezuela in terms of their blatant interference in the Latin state’s affairs and their imposing economic siege and sanctions on it have become an approach they adopt with all states that do not agree with their policies.

The President said that what is going on in Venezuela is similar to what happened in Syria and that aims at imposing hegemony on states and controlling their independent decision, which undermines the international law and contradicts the most important principles of the UN Charter i.e. the respect of states’ sovereignty and right of self-determination.

For his part, Arreaza thanked President al-Assad for his supportive stance to Venezuela with regards to overcoming its current crisis and stressed that the tools and steps used by the states, which are enemies of Venezuela, are similar to those used in Syria for igniting war in it, adding that what has happened to his country is an episode of a series of the US continuous attempts for decades to control the Venezuela’s independent decision and the Venezuelan people’s resources.

He also stressed that the states that worked on stirring the situation in Venezuela misjudged the Venezuelan people, who have shown ability for resisting and defending their country as well as preserving its security and stability in the face of all foreign schemes plotted against it.

The meeting also dealt with the close relations binding Syria and Venezuela and the importance of going ahead in boosting them in a way that serves the interests of the two countries’ peoples.

In the same context, Deputy Prime Minister, Foreign and Expatriates Minister Walid al–Moallem met Arreaza and the accompanying delegation where the two sides discussed the relations of cooperation and the historic friendship binding Syria and Venezuela and means to enhance them at all fields to serve the interests of the two people and the two friendly countries.

The two sides also discussed the development of the situations in the both countries , and the US blatant conspiracy against them, as the views were identical regarding various topics discussed.

2019-04-04
Rasha milhem
Share
Previous A civilian killed, three others injured in terrorist attack on Mharda in Hama countryside
Next Tens of families arrive in Jalighem corridor in Syrian Badiya coming from al-Rukban Camp 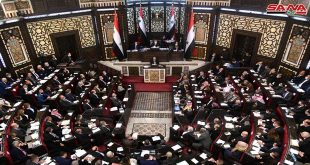