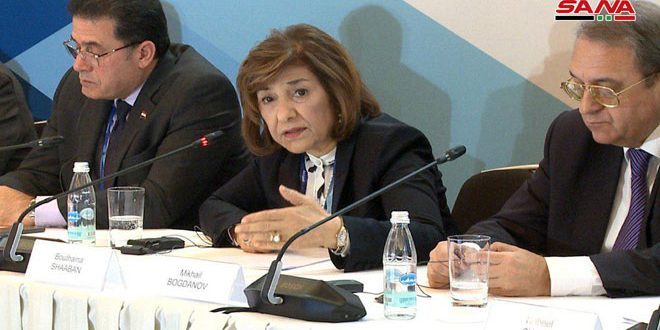 Moscow, SANA_ Presidential Political and Media Adviser Dr. Bouthaina Shaaban stressed that Syria is continuing its war on terrorism and will liberate every inch of its territory from terrorism or occupation.

” The countries which claim the fight against terrorism in Syria, on top the United States of America and Turkish regime , are its real backers to prolong crisis in Syria,” Dr. Shaaban said during the Valdai Discussion Club’s Middle East Conference titled “Middle East: New stage, old problems?” in Moscow Tuesday. 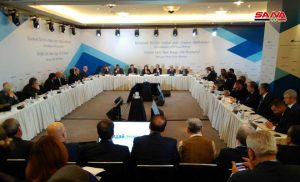 She said that the US occupation forces are protecting terrorists in the Al-Tanf area and targeting the Syrian Arab Army units to impede the liberation of the region from terrorism,” She said, adding that the International terrorism, which strikes everywhere, is systematic and funded by certain countries.

The Presidential Adviser stressed that Russia has taken important steps to support Syria in its war on terrorism. “Moscow has repeatedly called on the United States to cooperate in this field, but Washington and its allies have refrained from that; they supported terrorism and accompanied it with misleading media outlets and increased their unilateral coercive measures against Syria,”

Shaaban explained that the United States and its allies are taking terrorism as a pretext to wage war on countries and plunder their wealth while Russia and China using veto in favor of Syria based on their commitment to the UN principles and   Charter which stipulate for non-interference in internal affairs of states.

” The Constitution and everything related to it is a purely sovereign matter decided by the Syrian people without any outside interference through which some parties and states seek to impose their will on the Syrian people,” She said .

Shaaban pointed out that Western countries are intervening in Venezuela under the pretext of democracy and human rights. ” From our experience in Syria, we realize that these allegations have nothing to do with democracy or human rights at all, but they want regimes that do not represent their people and do not preserve the wealth of their countries,”

She clarified that the world is witnessing the birth of a new multi-polar international order built on the respect of the states’ sovereignty and the actual fight against terrorism.

In a statement to RT Channel on the sidelines of the Conference, Shaaban clarified that after its experience in Afghanistan, Iraq and Libya, the USA did not expect that Syria will withstand great resilience and be able-backed by its allies and friends- to foil its schemes.

She pointed out that Washington’s attempts of establishing “a state in eastern of the Euphrates” will fail because the Syrian people reject “division of their country” or any occupation of any part of it, and they will liberate every inch of its territories occupied by any occupiers the way they have liberated most of the territories from terrorism.

In an interview given to SANA correspondent in Moscow, Shaaban affirmed that the conference, which comprises a group of intellectuals, consultants and diplomats is an opportunity to clarify the view point of the Syrian State towards what is happening on its territory and the efforts exerted to solve the crisis in the country.

Meanwhile, Syrian Ambassador in Moscow  Riad Haddad said in a meeting dedicated for the reconstruction process in Syria that the Syrian government has started this process and building economy synchronizing with preservation of Astana process and supporting Geneva track.