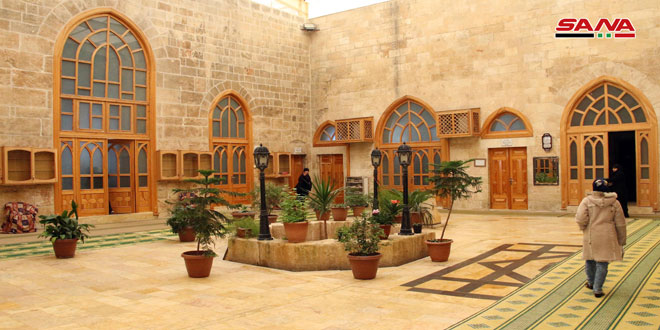 Aleppo, SANA_ Al-Kamiliyya Madrasa (school) is located outside walls of Aleppo old city and situated about 300 meters south of Bab El-Maqam . It is a living example of the great Ayyubid architecture.

The construction of the Madrasa dates back to the 13th century, the time of Fatima Khantun, daughter of Ayyubid sultan al-Malik al-Kamil and  husband of King Mohammed al-Aziz .

Archaeologist and Historian Abdullah Hajjar said that school was built in 1236 and that the building takes the form of a rectangular complex of about 800 square meters centered on a square courtyard.

One enters via a muqarnas-vaulted portal located on the western end of the north side of the building.

This portal gives onto a long, vaulted corridor running south down the western side of the complex, then turning at a right angle to run east onto the courtyard.

In turn, Engineer Mahmoud Saket, who is interested in heritage and archeology said the Madrasa contains an Iwan (large hall) with a mihrab (niche) and three corridors from the south, east and west as it is divided into several rooms.

Saket, who supervised the restoration works of a number of buildings and archaeological sites in old Aleppo, added that the Madrasa was as a madfafa (host place) for passers-by, seekers of knowledge, travelers or those coming to the city, where food and drink were  provided to them.

According to the novels, Saket said, the husband of King Kamil founded it, where that period was famous of building schools.

He pointed out that “Al-Kamiliyyah ” is known for its distinctive stone vaults and was rehabilitated in 2010.

The school still  retains its scientific and religious role as it has been designated an institute for the memorization of The Holy Quraan.

Director of the school, Mohamed Hamza Attar, said that “Al-Kamiliyyah” is a piece of mosaic of an integrated urban fabric in old Aleppo, which forms with the Khans( inns)  takayas, Bimaristan (hospitals) and commercial markets an integrated painting of the life that Aleppo is famous of.