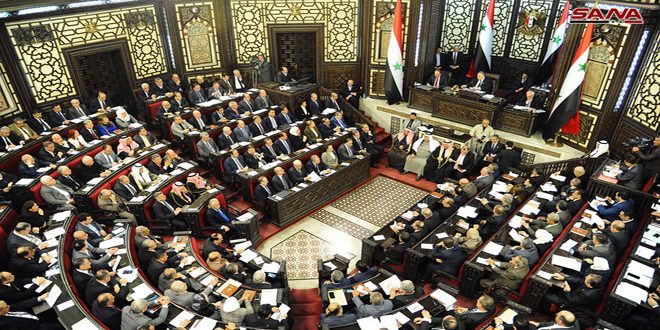 Damascus, SANA_ Prime Minister Imad Khamis said on Sunday that the unjust economic sanctions against the Syrian people were the main reason behind the delay and difficulty of delivering oil and nutritional substances imported to the country.

Khamis, speaking at the People’s Assembly’s 1st session of the 9th ordinary round of the 2nd  legislative term headed by Speaker Hammouda Sabbagh, added that the government recognizes the volume of  the citizens’ suffering from those sanctions and their repercussions on the daily life and each citizen

He affirmed that the government seeks to improve the standard of living through a number of basic sectors, mainly to boost the stability of each citizen in the regions of his work and the liberated areas in addition to the return of all institutions and services including the schools, roads, electricity, water and health utilities.

The Prime Minister stressed that the government is doing its best and seeking, by all means, to secure the needs of the local market in cooperation with friendly and allied countries, which are also subjected to unjust international sanctions aimed at dissuading them from  positions in support of the sovereignty and independence of countries.

Sabbagh, in turn, stressed that work of the People’s Assembly is complementary with the government in terms of serving the homeland and the citizen, adding that specific tasks must be completed at this session.

He pointed out that the next phase requires more effort for facing difficulties and challenges in different fields.