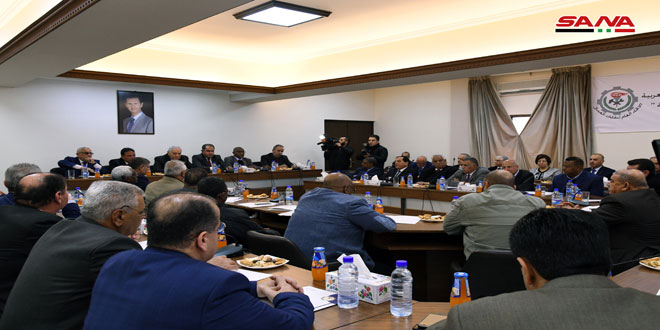 Damascus, SANA_ Participants in the consultative meeting of Chairmen of Arab Trade Unions  and annual meeting of general-secretaries of Arab vocational unions have asserted the necessity of joint action to contribute to the reconstruction of what have been destroyed by the terrorist war on Syria and return of displaced people to their country.

The participants’ assertion came during their meeting held in Damascus on Friday under the title “Role of Arab Vocational Unions in the Reconstruction of Syria”.

Secretary-General of the International Confederation of Arab Trade Unions(ICATU) Ghassan Ghosn underlined the important role played by Arab unions and vocational associations at the national and pan-Arab levels.

He emphasized the need for mobilizing ranks to rebuild what have been destroyed by the fierce terrorist war waged on Syria.

In turn, Chairman of the Federation of Trade Unions Jamal al-Qadiri said that Syrian workers faced the terrorist war against their country in all its forms by continuing to run the production wheel and standing by the Syrian Arab army in the war on terrorism.

Al-Qadri hoped the meeting to come out with best possible outcomes that strengthen the unity of the Arab ranks and be in the interest of the Arab workers.

He said that all Arab brothers are welcome in the reconstruction phase.