Al-Sayyed: We appreciate Russia’s support to Syria in its war against terrorism 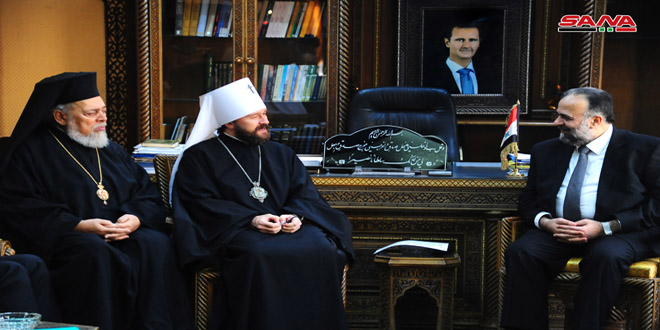 Minister’s al-Sayyed remarks came during a meeting with Chairman of Moscow Patriarchate Department for External Church Relations (DECR) Bishop Hilarion and the religious delegation accompanying him on Saturday evening.

Minister al-Sayyed added that, over the years of crisis, Syria has faced a Takfiri campaign which tried to undermine the unity of its people and to sow separation among them.

He affirmed that the religious institutions in Syria have confronted strange notions on society and its values and principles, and the Syrians have been able to defeat terrorism thanks to their steadfastness and sacrifices.

For his part, Bishop Hilarion expressed happiness over the return of normal life and stability to most of the Syrian territories.

He affirmed confidence that peace and stability will return to Syria thanks to the coexistence among the Syrians who have faced a foreign aggression backed by the US and Western states,  and who have foiled all the Western schemes.

Hilarion noted that the reconstruction in Syria after defeating terrorism requires all possible help.

Bishop Hilarion expressed his country’s readiness to all possible efforts to help Syria in the reconstruction process.

- al-Saayed Hilarion 2018-11-18
ruaa-jazaeri
Share
Previous Al-Sayyed: Syria defeated terrorism thanks to its people’s unity and coexistence
Next Sawa “Together” Bazar…Opportunity for marketing products made by wounded army personnel