President al-Assad: Syria continues work with all those who have real will to eliminate terrorism and restore stability to it 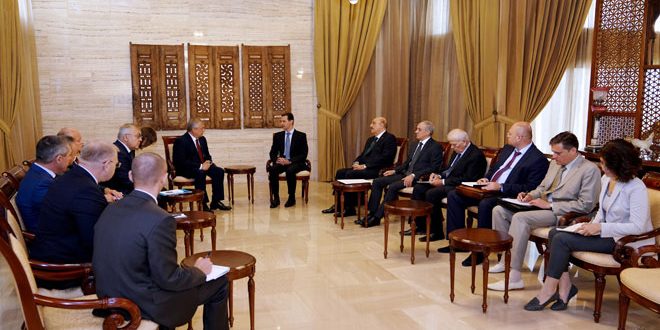 During the meeting, the two sides exchanged views on the developments in Syria, especially on the political track and the process of forming a committee to discuss the current constitution.

For his part, Lavrentiev said that the Russian side is satisfied with the positive attitude shown by Damascus and its openness to everything that would contribute to moving forward and achieving the desired progress on this path.

He stressed that such attitude helps in withdrawing excuses from some countries that exert great pressure in order not to achieve any progress in the political process with the aim of blaming Damascus and its allies for this later.

In turn, President al-Assad affirmed that some countries in the region and many Western countries continue to interfere in the political path and exert pressure to impose their will on the Syrians, which may hinder any progress. 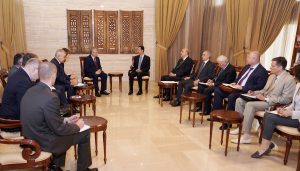 He stated that Syria continues to work with all those who have the real will to eliminate terrorism and restore stability while at the same time adhering to the right guaranteed by the international conventions stipulating for not allwoing any outside party to interfere in its internal affairs.

Lavrentiev briefed President al-Assad on the outcomes of his tour which included a number of Arab countries before his visit to Damascus as he stressed that Russia seeks through this diplomatic movement to exchange views on the issues of the region, especially the political process in Syria and moving ahead with the battle to eliminate terrorism in order to restore security and stability and preserve the unity and independence of Syria.