Rouhani affirms need to continue combating terrorism… Putin: Syrian state has the right to impose control over all its territory, including Idleb 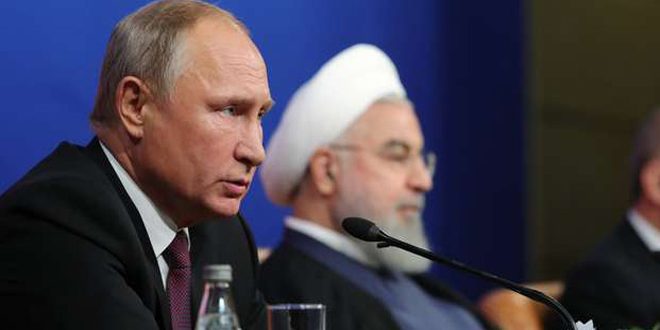 Tehran, SANA – Iranian President Hassan Rouhani said that the illegal US presence in Syria led to the deterioration of the situation in the country, stressing the need to put an end to this presence in the near future because it only led to the escalation of tension.

During the opening ceremony of the Tehran Summit for the guarantor states of the Astana process (Russia, Iran, and Turkey), Rouhani stressed the need to continue combating terrorism in order to eliminate terrorist groups, especially in Idleb, where the fight against terrorism is an integral part of the efforts to achieve security and stability in Syria.

He reiterated his country’s readiness to assist in the return of the displaced Syrians to their homeland and to rebuild infrastructure in Syria.

He also called on the international community to include the return of the displaced and the reconstruction of Syria on its agenda, affirming that Iran is ready to provide the greatest possible assistance in this field.

Rouhani affirmed that the Iranian consultative presence in Syria came under the request of the legitimate government to combat terrorism in Syria, and the decision to continue this presence will be determined in the future on this principle.

In turn, Russian President Vladimir Putin affirmed that the Syrian state has the right to impose control over all its territory, including Idleb, which is the final hotbed of terrorists. terrorists are positioned in the de-escalation zone in Idleb and are making attempts to disrupt the cessation of hostilities and carry out and prepare various kinds of provocations, including the use of chemical weapons.

He stressed that the bombings and attacks carried out by terrorists in Idleb cannot be ignored, adding that “there is a large number of civilian population in Idleb, and we have to take this into account. I have said that there are ongoing provocations and that attacks are being carried out with the use of drones, as well as bombings, and we cannot ignore this.”

Putin asserted that the Syrian government has the right to take control of all its national territory. and this is what it should eventually do.

He pointed out that implementing this task should be tackled using the mechanisms that have allowed the solution of such problems in the recent past.

2018-09-07
Manar
Share
Previous Damascus International Fair welcomes its visitors
Next President of Abkhazia: We seek to develop relations with Syria in various fields