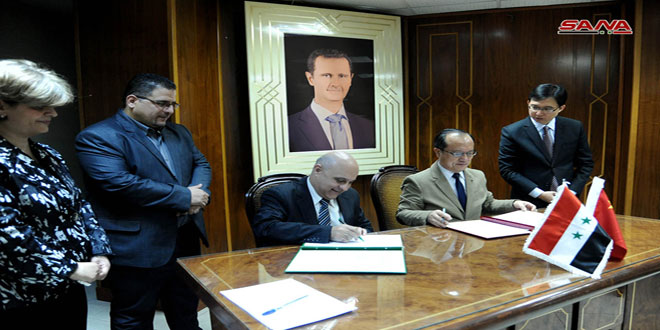 Damascus, SANA- Syria and China signed reciprocal letters related to the Chinese grants to the Syrian government including scanners and buses estimated at USD 20 million.

The reciprocal letters were signed at the Planning and International Cooperation Commission on Thursday.

Head of the Planning and International Cooperation Commission, Imad al-Sabouni said that the reciprocal letters come as part of the grants provided by China, including 100 buses for Local Administration and Environment Ministry, and scanners for the Customs Directorate.

Al—Sabouni expressed the Syrian government’s appreciation for China’s stances in support for the Syrian people at economic and political levels during the crisis in the country.

For his part, China’s Ambassador to Syria Qi Qianjin affirmed the Chinese government’s continuous support for the Syrian people, pointing out that the current development will establish a new opportunity for the Chinese companies to participate in the reconstruction stage.