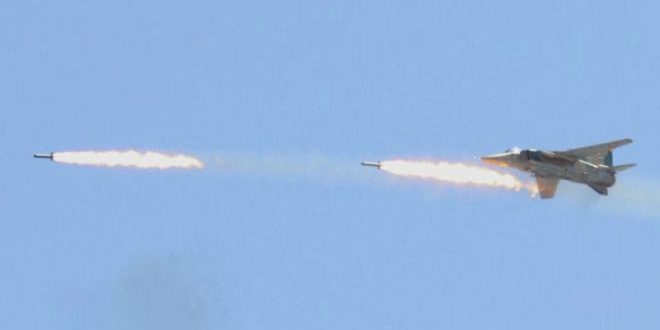 SANA’s reporter said that the Syrian Air Force carried out airstrikes on Daesh in the direction of al-Kra’a, Beir Qinyan and Sneim Gharaz about 30 km east of the villages of Sweida’s northeastern countryside.

The reporter added that scores of Daesh terrorists were killed, others were injured and their vehicles and ammunition were destroyed as a result of the raids.

Army units carried out intensive strikes against dens and positions of Jabhat al-Nusra terrorist organization and the affiliated groups in Hama northern countryside.

SANA reporter in Hama said that army units carried out bombardments against dens and supply routes of Jabhat al-Nusra terrorist organization and the affiliated terrorist groups in the villages of Zaizoun, al-Ziyara, al-Zakat, al-Arba’ain and al-Janabra in the northern countryside.

The reporter added that a number of terrorists’ positions were destroyed in the bombardments, in addition to cutting their supply routes, and killing a number of them including terrorist Taisir al-Essa.