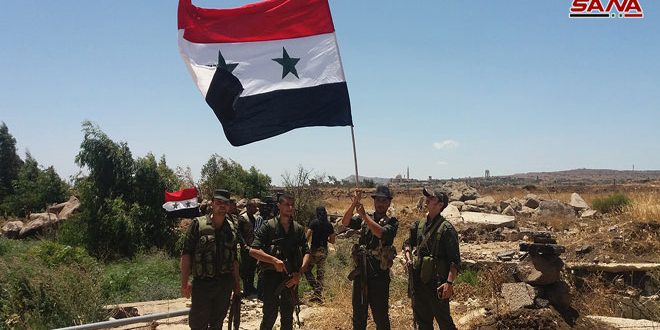 Quneitra, SANA-Units of the Syrian Arab army entered the liberated city of Quneitra and began to deploy in the city after routing terrorism in it, SANA reporter said.

According to the reporter, the army units entered the city on Thursday afternoon and deployed in the neighborhoods and streets, with the engineering units combing the city and dismantling mines and IEDs left behind by terrorists to secure the city.

The reporter indicated that during the sweeping operations, a field hospital with large amounts of medicines inside, some of which are Israeli-made, was discovered near al-Quneitra crossing in the liberated city.

Earlier, SANA’s reporter said units of the Syrian Arab Army entered the village of al-Hamidiya, 3 km to the north of Quneitra city, and soon afterwards the army’s engineering units started to comb the village and dismantle IEDs and landmines to clear the village in order to secure the return of locals.

The reporter added that the national flag was hoisted over the village in parallel with the army entering the town.

As part of the continued push to end the terrorist presence in the southern region, army units liberated on Thursday several towns and villages in Daraa and Quneitra countryside after eliminating the last gatherings of terrorists in the area.

A military source told SANA that army units tightened control over the towns and villages of al-Sheikh Hussein, Kawkab, al-Shabrak, Mseirteh, al-Lweihek and Salbak in Daraa northwestern and Quenitra southeastern countryside.
The source indicated that the army’s operations resulted in the death of several terrorists and the confiscation of large amounts of arms and ammunition.

Meanwhile, SANA reporter said that the army’s units made a fresh progress against Daesh terrorists in Jileen town in Daraa northwestern countryside.

The reporter said fierce battles took place between the army’s advancing units and Daesh-affiliated terrorist groups in the town, with many terrorists killed and others injured.

The air force launched intensive strikes against Daesh terrorists in al-Yarmouk Basin area, inflicting heavy losses on them in personnel and equipment, added the reporter.

A military source announced that units of the army established full control over Sahm al-Golan town in Daraa north-western countryside.

Later, units of the army established control over Tal al-Jomou and four strategic points in the northern countryside of Daraa and dismantled a number of anti-tank mines.

A military source told SANA that units of army entered Tseil and Edwan towns in the north western countryside of Daraa, killing a number of terrorists.

The source added that the engineering units are removing and dismantling mines and explosive devices planted by terrorists around facilities and houses. 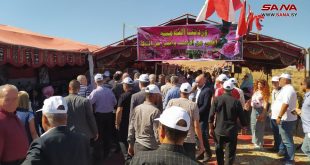