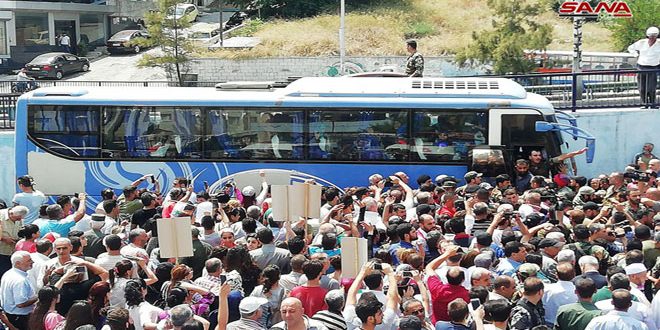 Lattakia, SANA- Freed abductees of Ishtapraq village and hundreds of Kefraya and al-Fouaa towns arrived in Lattakia city on Friday.

SANA’s reporter in Lattakia said that citizens in Lattakia city gathered before the Arabic Culture Center welcoming 33 abductees previously held by terrorist organizations in Idleb countryside who arrived in Lattakia city after being liberated.
Speaking to SANA, the liberated persons thanked the Syrian Arab Army and hailed its sacrifices as they talked about the criminal acts of terrorist organizations against them as abductees.

In the same context, the reporter said that about 300 persons from Kefraya and al-Fouaa towns in Idleb countryside arrived in Lattakia city amid a warm popular welcome coming from the temporary makeshift center in Jibren in Aleppo countryside.

“My daughter is still held captive and although her father and mother are alive, she is currently in an orphanage in Turkey,” she said, calling on all those interested in human rights to help her reunite with her 14-year-old daughter.