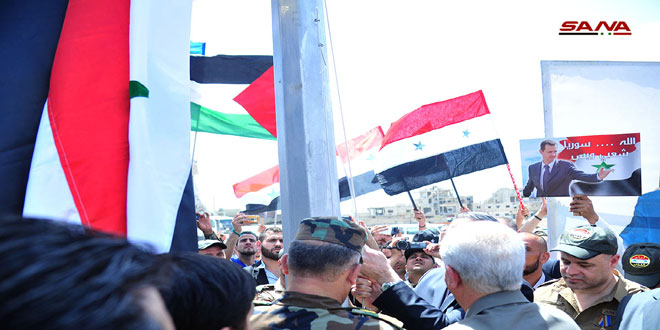 Damascus, SANA- A mass celebration was held on Thursday at al-Najmeh Square in al-Hajar al-Aswad neighborhood in southern Damascus after cleansing the neighborhood of terrorism.

On Tuesday, units of Internal Security Forces entered the neighborhood and hoisted the national flag over the state’s institutions after clearing it of terrorists.

An army unit which took part in liberating southern Damascus from terrorism attended the celebration, in addition to public figures, members of local reconciliation committees and representatives of the allied forces.

The participants held national flags and pictures of president Bashar al-Assad, chanting slogans extolling the sacrifices of the Syrian army.