The Command said in a statement of which SANA received a copy that  units of the Syrian armed forces, aided by allied forces, have completed the cleansing of the entire al-Hajar al-Aswad and the area surrounding it of terrorists after a string of precision and successive military operations.

The General Command indicated that the military operations have left big numbers of Daesh (ISIS) terrorists dead, adding up to establishing full control over the areas of al-Hajar al-Aswad and al-Yarouk Camp, which was preceded by cleansing Yelda, Babila and Beit Sehem in southern Damascus of terrorists.

The new military win means that the entire towns of Western and Eastern Ghouta are now completely clear of the scourge of takfiri terrorism in all its forms and designations, with all its gatherings in these areas wiped out, said the Command’s statement.

The new victory is particularly important because it signifies the total elimination of the fiercest components of terrorist organizations and proves the Syrian army’s competence in sealing the defeat of externally backed terrorism, according to the statement.

It also ensures the safety of capital Damascus and its entire countryside, eliminating the sources of a terrorist threat that had haunted millions of residents and sought to disrupt normal life, which creates the environment for wiping out the residual hotbeds of armed terrorism on the Syrian territories, the statement said.

The Command went on to say that in parallel with announcing Damascus and Damascus countryside entirely safe and invincible areas, it affirms that the Syrian army is more resolved than ever to hunt down the remaining terrorism no matter how hard its sponsors strive to prolong its longevity.

“It is an irrevocable decision, purely Syrian,” said the statement, referring to the decision to eliminate terrorism. 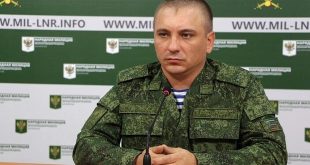 LUGANSK,SANA- The Luhansk People’s Republic stated that the number of deserters from the ranks of …