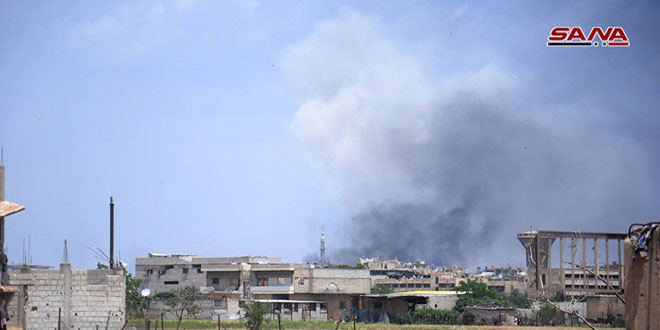 Damascus, SANA- Units of Syrian Arab Army on Sunday continued advancing in Damascus’ southern part, tightening the noose on the remaining terrorists in the northern part of al-Hajar al-Aswad neighborhood.

SANA’s correspondent in southern Damascus said that information circulated by some media outlets about the exit of Daesh terrorists from al-Hajar al-Aswad is untrue.

The correspondent added that the army is carrying out combat tactics to cleanse the building blocks, tunnels and trenches, destroying terrorists’ dens and fortified points.

The Army’s storming units are engaged in a building-to-building pursuit of terrorists after cordoning them off in a narrow residential area, according to the correspondent.

The correspondent affirmed that heroes of Syrian Army are thwarting terrorists’ attempts to hinder the army’s advance to liberate al-Hajar al-Aswad neighborhood ahead of announcing Western Ghouta fully cleared of terrorism.