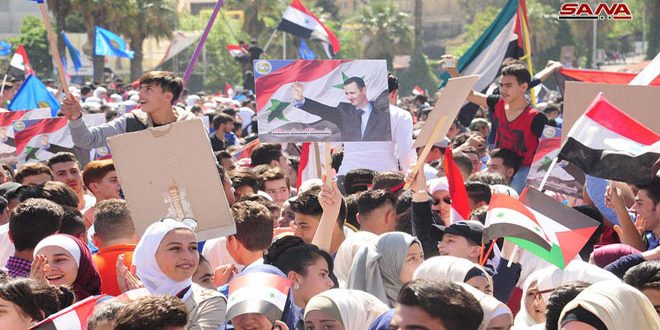 Damascus, SANA- Tens of thousands of Syrians gathered at the Umayyad Square in Damascus on Monday to mark the 72nd anniversary of Evacuation Day (Syrian Independence Day, which marks the evacuation of French occupation forces from the country in 1946) and the victories of the Syrian Army on terrorism and the recent tripartite US-British-French aggression on Syria.

Evacuation Day mark Syrians 2018-04-16
ghossoun
Share
Previous After liberating their city from terrorism, Douma residents eager to return to their houses and farms
Next SANA reporter in Homs: One civilian martyred, a woman and a girl injured as terrorist organizations fired rocket shells on al-Ashrafiyeh village in Homs northern countryside