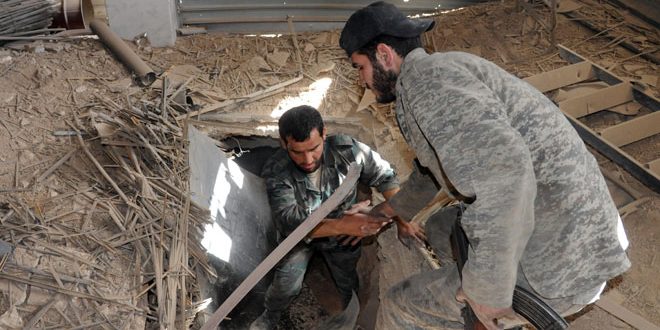 SANA’s correspondent at Hazza town said that units of the army carried out large-scale inspection and combing operations inside the town, finding a field hospital and a network of long tunnels including one that links Hazza with Kafar Batna town, which was used to transport terrorists and store weapons and ammunition. 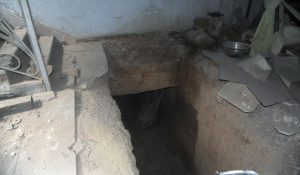 SANA’s correspondent that after the advance of the Syrian Arab Army towards Hazza town, a complicated tunnel network linked to the sewage network was discovered, adding that the terrorists were using them for transportation and weapon transfer between the towns of Saqba, Erbin, Harasta and Zamalka.

He clarified that the tunnels are three meters wide and four meters deep so vehicles can pass easily through them.

The commander said that explosives and mines planted by terrorists inside the tunnels were defused, and the biggest of the tunnels was destroyed.

A large stock of medicine and field hospitals equipped with medical equipment stolen from government hospitals were also discovered in the towns of Hazza and Ein Tarma according to the commander.

The correspondent clarified that 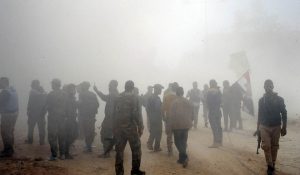 army units continued today to secure locals inside their houses in the towns of Hazza, Ein Tarma, Kafar Batna, and Saqba, as mobile clinics that belong to the Ministry of Health provided free healthcare for the locals in Saqba.

SANA’s camera roamed in Hazza town and documented the devastation to the infrastructure, services facilities, and schools caused by terrorist organizations.

In the same context, the Syrian Arab Army continued today securing the corridor leading to al-Wafideen Camp, where a new batch of civilians exited Ghouta and they were transported to housing centers.

hazza terrorists tunnels 2018-03-26
Rasha milhem
Share
Previous Preparations underway for exit of third batch of militants and their families from Ghouta, militants in Douma prepared to leave
Next Syria reiterates demand for immediate and unconditional withdrawal of Turkish occupation forces from Syrian territory