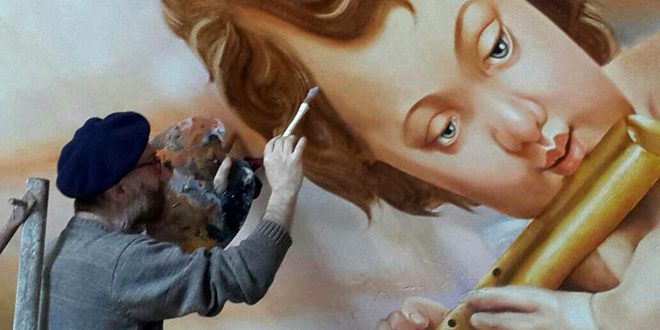 Aleppo, SANA – The Assumption of Mary mural currently being painted on the dome of the Syriac Catholic Church in al-Aziziyeh neighborhood in Aleppo, a church which had been damaged by terrorists and underwent renovations, is a massive artistic undertaking by the unique creative talents of brothers Bashir and Nemat Badawi. 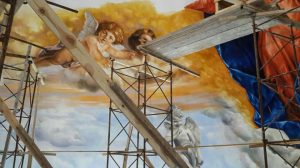 The mural is being painted on an area of around 700 square meters on the church’s dome, which is over 43 meters high, with the artists working on scaffolds set up under the entirety of the dome.

Nemat Badawi said that this project is the first of its kind in Aleppo, and it involves several stages of work which began three months ago, and currently the mural is 90% complete. 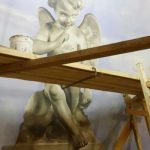 He said that the mural depicts the Assumption of the Virgin Mary into Heaven, with both decorative and aesthetic elements that have spiritual significance.

Syriac Catholic Metropolitan of Aleppo and its Surroundings, Archbishop Shahda, said that the Church sustained damage when it was targeted by terrorists’ shells back in 2014, and as renovations and repairs were carried out in the Church, the Badawi brothers opted to present this powerful work of art as a tribute to the people of Aleppo.

Meanwhile, Bashir Badawi said that the mural should be completed within 20 days, and that the main focus of the mural is the Virgin Mary accompanied by a host of cherubim. 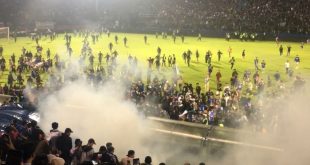 Moscow,SANA-The number of people killed in a stampede and riot after a soccer match in …