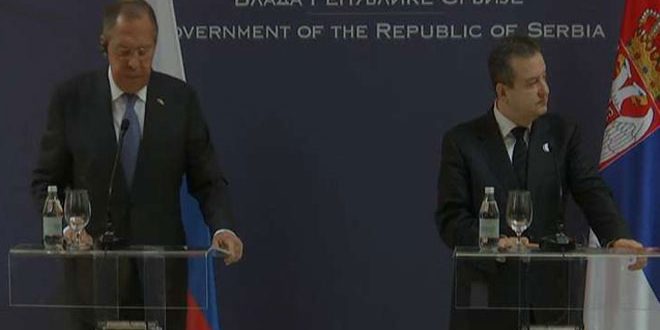 Belgrade, SANA- Russian Foreign Minister Sergey Lavrov said on Thursday that the Western countries are turning a blind eye to the attacks carried out by Jabhat al-Nusra and other terrorist organizations of the Eastern Ghouta.

In a press conference with his Serbian counterpart Ivica Dacic in Belgrade, Lavrov said that Moscow has deep concern over the way of tackling the humanitarian issues in Syria which aims at blaming Damascus and protecting the terrorist organization.

He added that Russia is ready to consider the draft resolution that will be read at the UN Security Council session today, but it has proposed a clear formula, which is that any calm cannot include the terrorist organizations that systematically bomb the residential areas of Damascus.

Lavrov said that Russia had called for Thursday UN meeting.

”We offered to consider the situation in Eastern Ghouta and the situation around it. If our arguments are ignored yet again, we will have no other choice but to believe that the authors of this initiative yet again want to blame Damascus and protect terrorist groups, “he said.

He said that Jabhat al-Nusra and those who interact with it continues to shell the city of Damascus from their positions and use the civilian population of Eastern Ghouta as a human shield.