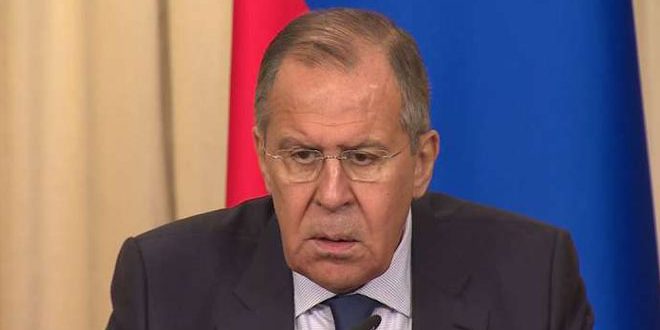 Moscow, SANA- Russian Foreign Minister Sergey Lavrov said that the Syrian Arab Army and Russian forces will continue eliminating Jabhat al-Nusra terrorist organization and its affiliated groups and that all the calls for “calm” are means to spare the organization’s terrorists.

In a press conference with his Algerian counterpart AbedelKader Messahel, Lavrov stated that “humanitarian problems in Eastern Ghouta and Idleb are being stoked” at the United Nations, adding that “Various initiatives, including at the UN Security Council, call on the Syrian army to stop its operations there. One initiative even provides for at least a month’s pause to calm down the situation and deliver humanitarian aid.”

“The problem is that in Idleb and in Eastern Ghouta, Jabhat al-Nusra, declared a terrorist organization by the UN Security Council, runs the show. Subsequent efforts to organize large-scale evacuation of civilians from that area encountered Jabhat al-Nusra’s refusal as it seek to keep these people as human shields,” Lavrov said.

Lavrov continue on to say that an agreement was reached to evacuate some civilians and people needing emergency medical assistance from Eastern Ghouta but all the exerted efforts was encountered by al-Nusra’s refusal that continue to target civilians and residential neighborhoods in Damascus.

The Russian Top Diplomat added that Russia asks its Western colleagues, who have influence of Jabhat al-Nusra, to take effort to discipline this organization; otherwise it is to be exterminated.

In turn, Messahel noted that Algerian and Russian efforts are directed cohesively to eliminate terrorism, hailing the correspondence in the two countries’ positions about the importance of resolving the crisis in Syria through the intra-Syrian dialogue and not interfering in their internal affairs.