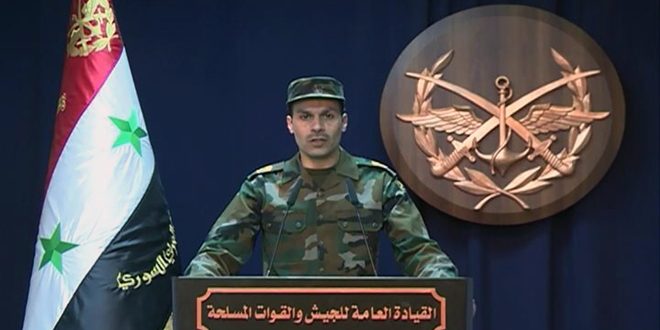 Damascus, SANA – The General Command of the Army and Armed Forces announced that the Syrian Arab Army, in cooperation with allied forces, liberated a large number of towns, villages, and farms in the countryside of Hama, Idleb, and Aleppo, eliminating a large numbers of the terrorists and destroying their weapons, headquarters, and positions.

The General Command said in a statement on Friday that after a series of successful operations, Syrian Arab Army units destroyed a large number of terrorists, most of them of foreign nationalities, in the countryside of Hama, Aleppo and Idleb, destroying the terrorist organizations’ headquarters, positions, and heavy weapons including car bombs, and seized armored vehicles, tanks, rocket launchers, and large quantities of weapons and ammunition.

The Command said that engineering units are dismantling landmines and explosives planted by the terrorists in the liberated areas.

The statement underlined the strategic importance of this achievement, which lies in the fact that it puts an end to the existence of Daesh (ISIS) terror organization in the provinces of Hama and Aleppo, and eliminates most of Jabhat al-Nusra terrorists in the southern countryside of Aleppo, adding that this also secures a number of transport and supply routes between the provinces of Hama and Aleppo and connects the two provinces with al-Badiya desert all the way to the Iraqi border.

The General Command concluded by asserting that the Syrian Arab army is determined to continue its military operations against terrorist organizations until security and stability are restored across Syria.