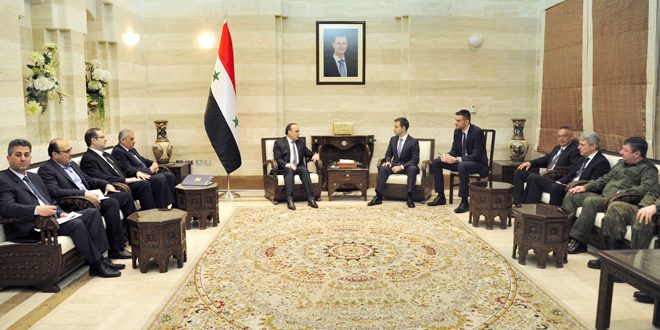 Damascus, SANA- Various technology and communication issues and means of having an optimal investment of them were discussed Thursday by Syria and Russia.

During a meeting between Prime Minister Imad Khamis and the Russian Minister of Communications and Mass Media Nikolai Nikiforov and the accompanying delegation, the two sides discussed ways to develop cooperation in the fields of information and communication technology (ICT) and the digital economy.

He said that Syria managed to preserve the information structure of the state despite the siege and terrorism, adding that it is paying increasing attention to develop ICT system as it represents the main artery for developing the institutions of government.

He expressed Syria’s welcome to the contribution of the Russian ICT companies to invest in the Syrian market in the upcoming stage.

Khamis underlined the need to form a joint committee aimed at having future ICT cooperation, setting a training plan for the cadres in this domain and getting benefits of the Russian expertise.

For his part, Nikiforov expressed his country’s readiness to develop cooperation between the two countries in the ICT field, attract the Russian digital companies’ investment to Syria, provide the necessary expertise in the field of developing effective communication system and invest in high speed internet.

Syria and Russia discuss cooperation in communication and IT

Minister of Communications and Technology Ali al-Zafir discussed with Russian Minister means of bilateral cooperation in various domains related to communication and IT.

During the meeting, the two sides dealt with a number of projects aiming at developing Syrian communication sector and activating investments in it.

Al-Zafir said that a number of project 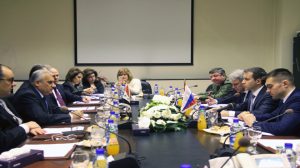 s that were signed by the Russian and Syrian sides in 2016 will be launched.

The Minister pointed out to the importance of Syrian-Russian cooperation in digital economy and benefit from the Russian experience in IT and e-government, in addition to training Syrian specialists.

Nikiforov, in turn, affirmed his country’s readiness to support Syria in the reconstruction phase, adding that “the biggest Russian IT companies are ready to support and provide expertise for Syria, especially in the field of e-government, Information Security (IS) and digital content in the public and private sectors.”

The Russian Minister said that his country welcomes the Syrian companies to work in the Russian market in informatics field and vice versa.