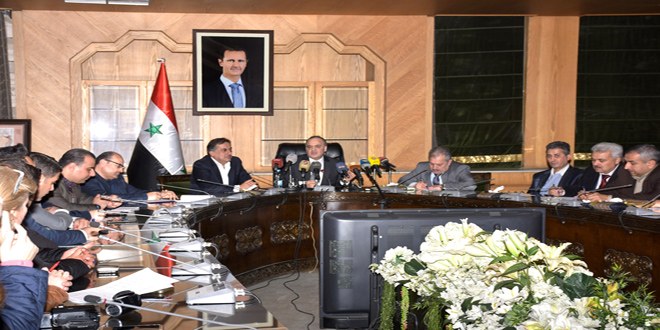 Aleppo, SANA- Prime Minister, Imad Khamis, said the government started a new stage of implementing the work programs in Aleppo province through following up all service projects connected to rehabilitating the electricity networks, roads, water and sewage, in addition to the plans needed for rehabilitating and building factories, industrial and economic establishments.

During a meeting of the government delegation, chaired by Khamis, with Journalists in Aleppo on Monday, the Premier briefed them on the government’s vision on rebuilding the city and achieving a qualitative step in the province on the service, economic and developmental levels.

He added that reactivating the role of the state’s service institutions and administrative units constitutes one the government’s top priority in the province.

Khamis said that Aleppo constitutes a main pillar of the Syrian economy, adding that the government spares no efforts in alleviating and increasing the production process through setting plans to re-operate all factories in the province.

Earlier, participants in the meeting of the government delegation with chairmen and members of the popular organizations and the trade and scientific syndicates in Aleppo called for accelerating the rehabilitation processes and activating the economic and industrial facilities which have been harmed due to the terrorist war on Syria.
They underlined the necessity of providing all the requirements of achieving a balanced economic development.

The participants also discussed means to enhance cooperation and coordination among different governmental bodies and the unions and syndicates to achieve a comprehensive development.

They also underlined need for developing the role of the working class in supporting the industrial, trade, agricultural and touristic development and in upgrading the economic and social reality, in addition to supervising the performance efficiency.

For his part, Premier Khamis indicated that the government continues to work on implementing its vision on the reconstruction as it has allocated huge sums of money to launch a comprehensive developmental process in the city.

He highlighted the importance of integration among all the social, economic and civil activities in the province to upgrade the situation in it.