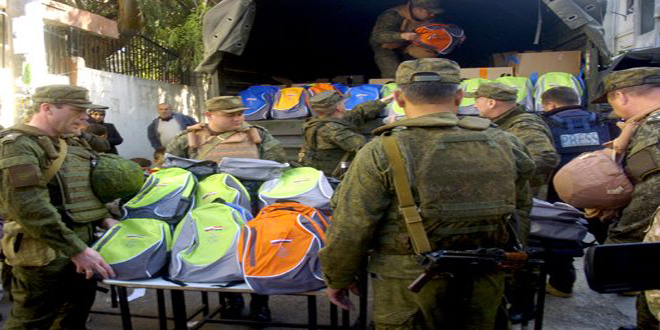 Lattakia, SANA – On the occasion of Christmas and New Year, Hmeimim-based Russian Coordination Center distributed on Friday school bags, stationery and milk to the children of the martyrs in Ghassan Zwan School and those of the Russian community in Lattakia and its countryside.

In a statement to journalists, an officer from the Syrian Arab Army who supervised the distribution process said that Russia’s support reflects the deep-rooted relations of friendship and cooperation binding Syria and Russia, adding that it conveys a humanitarian and moral message with the aim of bringing a smile to the faces of the children of martyrs who sacrificed their souls to defend Syria and eradicate takfiri terrorism.

In turn, Representative of the Russian Coordination Center noted that the gifts are presented by Russia’s children to fill the hearts of Syrian children with joy and happiness on the occasion of Christmas and the New Year, expressing hope to restore security and safety to the whole Syrian territory.