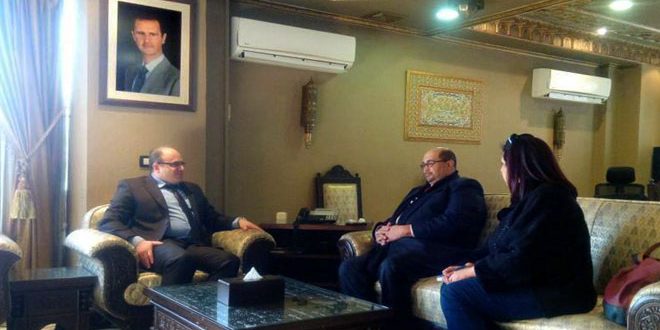 Damascus, SANA_ Minister of Economy and Foreign Trade, Dr. Mohammad Samer Al-Khalil, said that the Syrian economy has entered the recovery phase, adding that the government’s support provided to the production process and increase in volume of Syrian exports to foreign markets are the most important signs of this stage.

The Minister hoped that South African companies would start a “pioneering investment project in Syria”, hailing the potentials of these companies and their expertise in various sectors.

He stressed that post-war reconstruction phase is an important opportunity to promote economic cooperation between the two countries quickly.

In turn, Ambassador Byneveldt stressed that his country looks forward to participate in the reconstruction of Syria, especially in the commercial sectors, pointing to the importance of developing many of the existing economic agreements between the two countries and increasing their effectiveness in a way that fits the current situation in Syria.