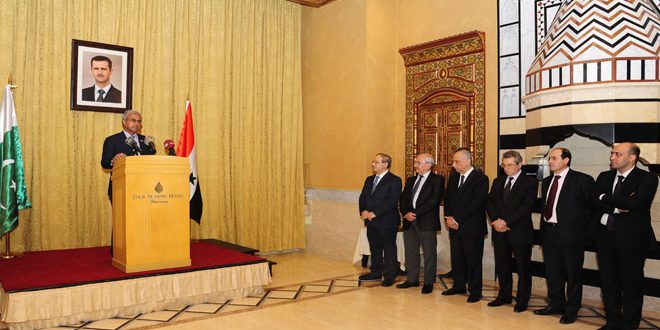 Damascus, SANA-Foreign and Expatriates Ministry held on Thursday a farewell ceremony at the Four Seasons Hotel in Damascus for the Pakistani Ambassador in Damascus Syed Athar Hussain Bukhari who has ended his mission as an ambassador of his country in the Syrian Arab Republic.

In a speech during the ceremony, Deputy Foreign and Expatriates Minister Fayssal Mikdad hailed the strong relations connecting Syria and Pakistan, adding that Syria is proud of its achievements and victories and it is proud of the countries which stood by its side.

For his part, Ambassador Bukhari described as deeply-rooted and brotherly the relations between Pakistan and Syria, pointing out that Syrian-Pakistani joint ministerial committee will make more efforts in the upcoming days to strengthen cooperation between the two countries. awarded Bukhari the Shield of Foreign and Expatriates Ministry as a gesture of mutual friendship and amity.