Temperatures will drop; rain continues to fall in various areas 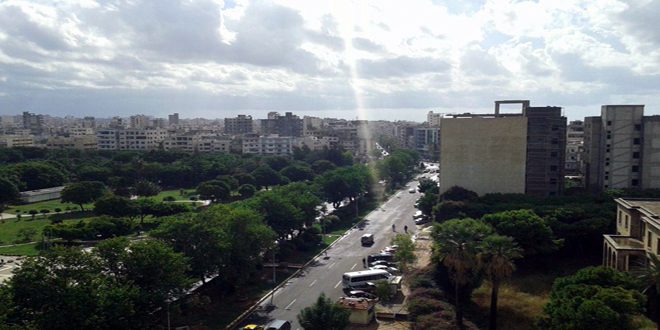 Damascus, SANA- Temperatures will slightly drop to become below average from 2 to 4 degrees as the country is still affected by a superficial low air pressure accompanied by western wet airstreams in the upper layers of the atmosphere.

The Meteorology Department expected in its Monday bulletin that the skies will be partly cloudy in general; rain showers accompanied with thunder will develop over various areas.

The winds will be western to southwestern of moderate speed with active gusts, while the sea waves will be moderate to high in amplitude.

Rain continues to fall in various areas across the country; the heaviest rain amounts according to the rain bulletin issued by the Ministry of Agriculture and Agrarian Reform, reached 67 inLattakia and 55,3 in Tartous.

The rain amounts during the past 24 hours till 00:07 o’clock in today morning in some Syrian areas according to the bulletin are as follows: 3mm in Damascus and its countryside, 3mm in Daraa, 6mm in Quneitra, 29mm in Homs, 31mm in Hama and 20mm in Aleppo .