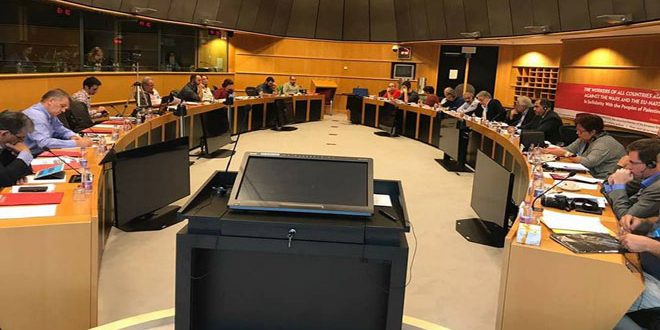 Brussels, SANA – Participants at the trade union symposium in Brussels affirmed their strong condemnation of the unilateral coercive economic measures imposed by the United States and the European Union against Syria, its people and its workers.

Organized under the slogan of supporting the Syrian people against imperialism, wars and the intervention of the EU and NATO, the symposium was held upon the invitation of the Greek “All Workers Militant Front” (PAME) at the European Parliament’s HQ on October 19-20 under. It was attended by the heads of EU trade unions.

Some of the participants, who have had the chance to visit Syria, pointed out that their visiting and meeting with the unionist leadership in Syria helped them get a deeper and clearer picture of the situation in the country.

They stressed that the western sanctions imposed on Syria target every Syrian citizen who stayed in their homeland.

They called on the President of the European Parliament to work to lift the unilateral coercive economic measures imposed on the Syrian people immediately and also called on all free people in the world to use their influence to pressure their governments to have these measures lifted because they violate international law and human rights law as approved by the United Nations Charter.

The participants were surprised by the technological and financial support provided to the terrorist groups, whereas the Syrian people suffer in all aspects of their lives, believing that this is real evidence of the hypocrisy of the Western world.

Following up on implementing the decisions of the International Trade Union Conference in Solidarity with Workers and People of Syria against Terrorism, which was held in Damascus last September, the participants handed President of the European Parliament Antonio Tajani a recommendation on lifting the siege and economic sanctions on the Syrian people through the Greek parliamentarians in the European Parliament. 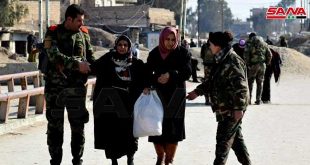