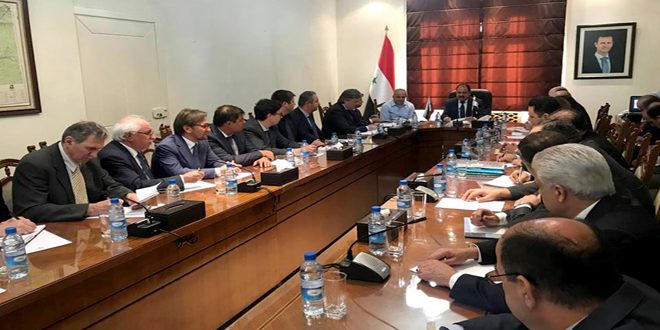 Damascus, SANA – Transport Minister Ali Hammoud met on Saturday a Russian delegation headed by Deputy Minister of Energy Kirill Molodtsov, discussing with them cooperation in the fields of transport investments.

Hammoud briefed the delegation, which includes Deputy Ministers of Transport and Industry and senior officials of Russian companies, on the Ministry’s work the vandalism carried out by terrorists against transport networks, pointing out to the unilateral measures imposed by the US, Europe, and some Arab countries which affected the aviation and ships sectors.

The Minister outlined his vision for the Ministry’s future plans, including a new airport in Damascus and a new harbor or expanding the current one in Lattakia, in addition to establishing a marine industries city, building new railways, and rehabilitating old ones, in addition to detailing the vision for linking harbors to Damascus and its airport going through the Fairgrounds.

For his part, Molodtsov said that the delegation’s visit seeks to improve economic, industrial, and trade relations between the two countries, particularly in the petroleum, energy, and transport sector, as well as participating in the reconstruction process, adding that the delegation has a big agenda containing visions for developing work in Syria.

In turn, Deputy Transport Minister Viktor Olersky said that Russia is prepared to take part in several investment projects in Syria, underlining the importance of Syria’s geographic location, and stressing the importance of supporting the maritime transport sector due to its role in imports and exports.