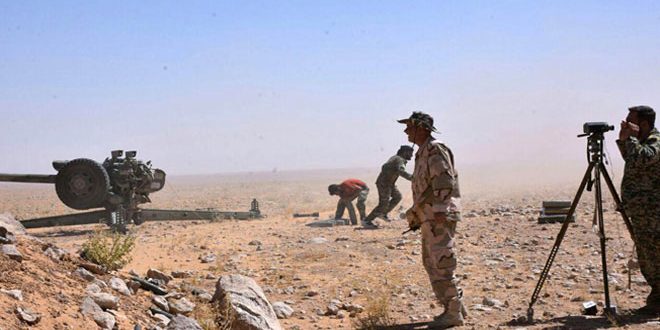 Army units foiled a terrorist attack with a vehicle rigged with explosives on one of the military posts in Hwaijet Saqr, inflicting heavy losses upon ISIS terrorists in different areas in Deir Ezzor City and its countryside.

The reporter added that the army’s operations coincided with firing rockets and carrying out intensive raids by the Syrian Air Force on the fortifications and positions of ISIS terrorists in Hatla, al-Husseiniyia and Hwaijet Saqr, and the neighborhoods of al-Hwaiqa, Kanamat, Khasarat, al-Rushdiyia, al-Ardi and al-Orfi, killing a number of terrorists and destroying their fortifications.

In the same context, prominent leaders of the ISIS terrorists continued to flee away from the province, according to civil sources.